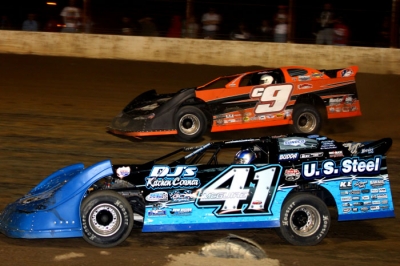 PORTSMOUTH, Ohio (Aug. 18) — Everything came up 18s on Saturday at Portsmouth Raceway Park. On the 18th of the month for the 18th annual Fred Dillow Memorial, Steve Casebolt of Richmond, Ind., rallied from his 18th starting spot for a victory in the 35-lap unsanctioned event. | Slideshow

Casebolt pocketed $5,000 for his stirring run on the high side as he took the checkers ahead of Grayson, Ky., drivers Jackie Boggs and Josh McGuire. Jason Montgomery of Jackson, Ohio, was fourth with Eddie Carrier Jr. of Salt Rock, W.Va., rounding out the top five.

Boggs led the first 22 laps laps before Carrier wnet out front. Boggs and Carrier got together battling for the lead on lap 28, and Casebolt took advantage to slip by both of them and hold the lead the rest of the way.

Casebolt’s victory gave him a $10,000 weekend in Ohio as he collected $5,000 the previous night at Moler Raceway Park in Williamsburg.