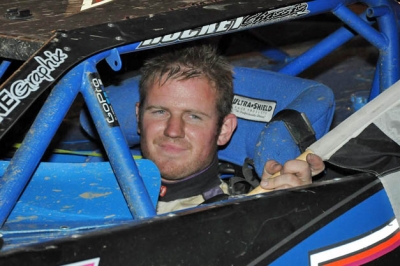 Miley overcame an early flat tire, rallying back to the front to grab the lead from fellow South Park driver Keith Barbara on the 41st of 53 laps.

PPMS veterans Baker and Lynn Geisler of Cranberry Township, Pa., led the field to the green with Geisler taking control quickly before fourth-starting Miley hit the turn-two wall, drawing a caution. Miley went to the pits with a flat right-front tire before rejoining the event at the tail of the 30-car field.

Geisler again took charge on the restart while Gregg Satterlee grabbed second before bouncing off the turn-four wall, recovering in time to keep Baker in third. The pace was slowed again on the fifth lap when Boom Briggs slowed with heavy damage on the backstretch.

Geisler continued out front while the 10th-starting Barbara worked his way up to fourth and Miley stormed back to the front, reaching the 12th spot after nine laps.

As Geisler began facing lapped traffic a few circuits later, Barbara moved up to third and Miley worked his way into sixth by lap 20. After a quick caution, Barbara took second from Satterlee while Miley reach the fourth spot.

Geisler’s torrid pace halted when his motor let go on lap 28, bringing out another yellow and putting Barbara in the lead for the restart over Satterlee and Miley.

After a lap-29 restart, Barbara and Satterlee raced side-by-side for the lead before Satterlee lost the handle and spun in turn four on lap 38.

When racing resumed it was Barbara and Miley racing side-by-side for the lead before Miley finally cleared Barbara out of turn two on lap 41. Miley led the rest of the way for his first victory in his uncle’s race.

Notes: Miley’s Rocket Chassis is sponsored by Colussy Chevrolet, Forcey Coal and Brougher’s Machine Shop. ... The victory was the second of Miley’s career with ULMS and fifth with UFO. ... The race was roof-optional, and about half the entrants ran their cars topless. ... ULMS competitors head to Eriez Speedway in Hammett, Pa., for an Aug. 26 event while UFO competitors race next Aug. 31 at Tyler County Speedway in Middlebourne, W.Va., as part of the Black Diamond 125 weekend.

Correction: Updates will all 29 finishers.