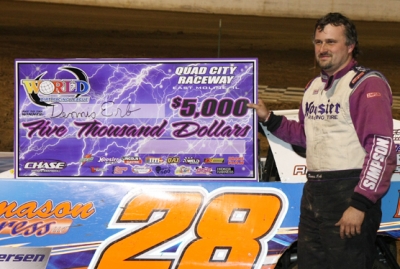 EAST MOLINE, Ill. (April 20) — Dennis Erb Jr. of Carpentersville, Ill., survived a variety of cautions and battles with lapped traffic at Quad City Raceway to earn $5,000 and his first-ever victory with the World Dirt Racing League. "I was just lucky getting through the lapped cars," Erb said in victory lane. "I saw two- and three-wide (battles) in front of me, but by the time I got up to them, I found an opening to get by." | April recaps | Slideshow

Fourth-starting Darren Miller of Chadwick, Ill., winner of WDRL's season opener at Davenport (Iowa) Speedway, got as close as Erb's rear deck but couldn't find a way past in settling for second. Another pair of Illinois drivers rallied for top-five finishers as Wes Steidinger of Fairbury raced from 18th to third and Steve Lance of Cuba raced from 20th to fourth. Iowan Brian Harris was fifth and the first non-Illinois driver across the finish line in a race shortened to 44 from 50 laps by curfew.

Frank Heckenast Jr. of Orland Park, Ill., and Chad Simpson of Mount Vernon, Iowa, started on the front row and battled early. But Erb quickly stuck his nose into the battle for the lead and eventually took command. A series of yellow flags and heavy lapped traffic kept the field on his back bumper. Heckenast's night ended early when he was collected in an accident, while mechanical failure ended Simpson's night.

Notes: Erb's Rayburn Race Car is sponsored by J&J Steel, Petroff Towing and Thomason Express. ... Saturday's WDRL event at Freeport (Ill.) Raceway Park was rained out and rescheduled for the next week, April 26.