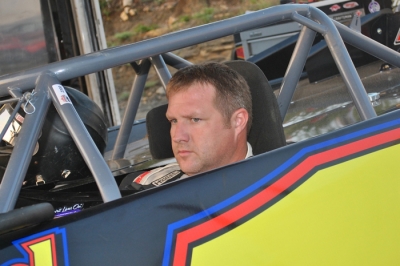 LOCUST, GROVE, Ark. (Aug. 17) — Thanks to a strong move from sixth to fourth on a late restart in Friday’s final Comp Cams Topless 100 heat race, Jack Sullivan can sit back and relax Saturday afternoon at Batesville Motor Speedway.

“That’s a huge relief,” Sullivan said. “That was pretty dang frustrating when we were sitting there out of the transfer spot.”

After riding in sixth for most of the race, Sullivan’s move was helped out by a brief tangle between Earl Pearson Jr. of Jacksonville, Fla., and Jonathan Davenport of Blairsville, Ga., on a restart with three laps remaining. While the two drivers slipped high just ahead of Sullivan in the first corner following the restart, Sullivan still had to drive hard into turn three to make his pass stick.

“They got to racing there and slid up the racetrack a little bit,” Sullivan said. “I don’t know, it was like I blinked and I was sitting there going into fourth going down the back straightaway. I pulled up beside Earl there, and I thought well, ‘clear high! Here I come.’ I’m glad it worked out.”

Sullivan likes his chances of moving up in the feature. He’s been fast at Batesville all weekend before over adjusting slowed him down for Friday’s time trials.

“We hot lapped last night pretty good, and we even hot lapped tonight good,” Sullivan said. “Stupid me, I work on it and free up to time in, but the more I freed up, the worse I got. I just put it back like I had it and we weren’t too bad out there. I think we’ll be pretty good for the feature if we can stay out of trouble.”

Hometown driver Wendell Wallace wasn’t very happy with Will Vaught of Crane, Mo., after Vaught made significant contact with Wallace’s car as he took the third spot in Friday’s third heat race.

“I guess it’s Will Vaught being Will Vaught,” said Wallace, who recovered from the incident to hang on to the fourth and final transfer spot. “You can race with most all these guys around here in the pits, but it’s like he runs over everybody he gets next to. Me and him will have an issue before it’s over with.

“What’s frustrating is he had a better car than I did. He could’ve passed me a lap later without tearing my left side off. But it’ll come back to him.”

Vaught said the contact wasn’t intentional, noting that the high-speed track surface made it easier to make mistakes.

“You don’t really have no time to think. He gave me a little opening there, and I pushed the issue like anybody would.”

After his solid performance in Friday’s prelims, Jared Landers is hoping a trip to his hometown racetrack will turn out to be just what he needed to turn around his dismal 2012 season.

Landers, who scored an upset victory in the 2010 Topless 100, will roll off from the inside of the second row in Saturday night’s main event as he looks for his first top-five finish on the Lucas Oil Series in more than three months.

“We need a win,” Landers said. “We’ve had back luck. We’ve come up through there and had some strong races going and stupid luck catches us. We’re tired of it. Our team needs a good finish even if it’s not a win.

“A top five would be great here. It’d help get our heads back together, so maybe we could get back out there and win some races before the end of the year.”

Morgan Bagley was much more confident in Friday’s Topless prelims than in recent trips to Batesville. The confidence showed when the Longview, Texas, driver raced his way into Saturday’s main event with a fourth-place heat race finish.

“We’ve been here twice before. It helps to come back and just have a little more confidence and know what’s going on,” Bagley said. “It’s a pretty fast joint, but can be pretty treacherous out there.

“It’s definitely a relief. We’ve ran our share of B-features this year. It’s nice to be locked in and have that pressure off your shoulders.”