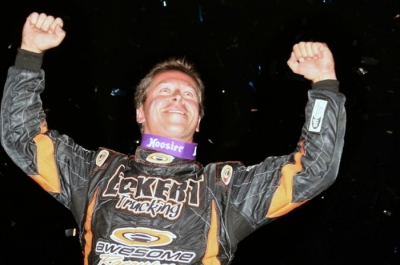 The national tour’s defending champion outdueled returning two-time titlist Josh Richards to gain control on lap 27. He then dominated the race’s second half to snap the six-race win streak of 2012 circuit dominator Darrell Lanigan, who settled for a fifth-place finish after starting 12th.

Eckert, 46, of York, Pa., earned $10,650 for his third WoO victory of the season, tying him with Tim McCreadie of Watertown, N.Y., for second on the ’12 win list behind Lanigan’s single-season record of 13. He was also proud to be the driver to finally shut Union, Ky.’s Lanigan out of victory lane.

“I’m glad I stopped him,” Eckert said of Lanigan. “He’s been on a roll. He’s been for sure the guy to beat all year long, so this is big for our team.

Richards, 24, of Shinnston, W.Va., started from the pole position and led laps 1-16 and 18-26, but he crossed the finish line as the runner-up, 2.098 seconds behind Eckert. He made his first WoO start in his father Mark’s Rocket Chassis house car since leaving the tour in April to pursue a NASCAR Nationwide Series ride.

Vic Coffey of Caledonia, N.Y., started and finished third, maintaining a firm grasp on the show position for the entire distance in his Sweeteners Plus Rocket. Terry Casey of New London, Wis., placed fourth in a MasterSbilt car and Lanigan was fifth in his Rocket after slipping into the position on the final lap when Richards’s teammate, Brandon Sheppard of New Berlin, Ill., lost momentum in a turn-two scrape with the lapped Eric Spangler of Lake City, Mich.

It was Richards who provided Eckert’s stiffest test. Eckert, who started from the outside pole, nosed in front of Richards to lead lap 17 but relinquished the spot the following lap and spent the next nine circuits in chase mode.

“Josh set a heck of a pace there early,” said Eckert, who registered his 27th career win on the WoO. “I couldn’t run with him. Then I got to thinking, Maybe if that top (cushion) blows off, maybe I could rotate the center better than him because he was tight in.

“Finally, (the outside) slowed down and he couldn’t rotate the center quite as well as I could. Besides that, though, we were pretty equal.”

Eckert glided away from Richards once he gained command on lap 27, controlling a race that ran caution-free from lap 12 to the finish. He denied Richards a checkered flag that would have pulled the youngster back into a tie atop the WoO career win list, at 39.

“It’s great to see him come back,” Eckert said of Richards’s return to competition on the WoO. “He’s a heck of a racer and I like him a lot, but I didn’t want to see him win his first race back.”

Richards was his usual gracious self following the race.

“We were good, but once the track got dirty our car was just too tight,” said Richards, who won last year’s inaugural WoO event at Winston. “We put everything similar to last year, but the track was a little narrower and we were on (Hoosier) LM tires this year vs. open tires (in ’11), and the LM tires just don’t steer quite as well. Because of that, we were just too tight.

“I tried to hold (Eckert) off, but he was just better. He did a really good job. He could really turn down into (turns) three and four. That’s where I would lose my time, and that’s where he ended up passing me.

“It definitely feels good to come back, win a heat race, lead some laps and end up second,” he added. “Obviously you want to win, but we’ll take second.”

Coffey, 41, recovered from a heat-race tangle with Lanigan that damaged his car to finish as solid third. He was over seven seconds behind Eckert at the finish but his final position was never seriously in doubt.

“We were much better than we’ve been lately,” said Coffey, who is still seeking his first-ever WoO victory. “But I think (Eckert and Richards) both had better traction. On those (three) restarts) they would just leave me. I think I could get in the corners as good as them, but from the middle out they were just hooked up a little better.

“Honestly, though, we had so much to fix after the heat, we only had time to make a few minor adjustments before the feature. We probably should have done more — we needed to be a little tighter to get more traction – but we just did what we needed to do to get out there.”

Three caution flags slowed the event. Duane Treadwell of LaGrange, Ga. (lap one) and Dennis Erb Jr. of Carpentersville, Ill. (lap 12) slowed to bring out yellows, and on lap 10 Jill George of Cedar Falls, Iowa, who had already been lapped, slowed in turn one and was rammed hard from behind by seventh-place Shane Clanton of Fayetteville, Ga.

Notes: Eckert’s Bloomquist Race Car is powered by a Jay Dickens Racing Engine and sponsored by J&K Salvage, Ritchey Sandblasting and Eckert Trucking. ... A dozen drivers completed 50 laps. ... Seventeen were running at the finish. ... Forty-four cars were entered in the event, which was run before a big crowd on a refreshingly cool summer evening. ... Among those failing to make the feature lineup: Ryan VanderVeen, J.R. Hotovy, Rich Neiser, Curtis Roberts, Casey Noonan, Tom Sprague Jr., Matt Pickard, Dave Hartman, Devin Sheils and Kevin Nelson Jr. ... Shane Clanton led a Kennedy Motorsports sweep of the top two spots in Ohlins Shocks Time Trials, besting his teammate Tim Fuller of Watertown, N.Y., for his second WoO fast-time honor of 2012. ... Clanton’s lap of 13.347 seconds set a new track record, eclipsing 13.568-second lap of Eckert from 2011. ... Brian Birkhofer of Muscatine, Iowa, finished sixth, creeping forward from the ninth starting spot. ... Brandon Sheppard, who briefly reached fourth when he passed Casey on lap 33, slipped back to seventh at the finish. ... Jason Feger of Bloomington, Ill., climbed into the top five late but settled for a ninth-place finish. .... The WoO will complete its Michigan doubleheader Saturday with the running of the NAPA Auto Parts Merritt 50 at Merritt Raceway in Lake City, Mich.