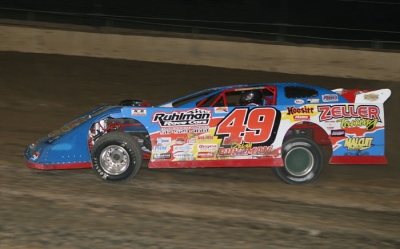 After a wild, first-lap frontstretch scramble involving several cars triggered by Ky Harper, Scott led the first four laps on the half-mile oval before Miller took command. Miller was in control on the 12th lap when Hillard Miller spun wildly off of turn four, coming to an abrupt stop. Hillard Miller's helmet shield was broken, apparently from debris, and he was taken to Mercer Health Center in Coldwater, Ohio, before being airlifted to Parkview Hospital in Fort Wayne, Ind. His condition was immediately unknown.

Matt Miller (no relation to Hillard) wasn't able to restart, retiring to the pits with engine problems and handing the lead to Ruhlman. The winner fought off challenges from Noonan and Scott, who got up to second before getting too high on the final lap and dropping two positions.

Notes: Ruhlman's entry is sponsored by Ruhlman Race Cars and Zeller Towing. ... Ruhlman finished second to Jon Henry in the modified feature. ... Scott James broke a driveshaft while running second. He was among cars involved in the first-lap mess on the frontstretch. ... Ky Harper and Wayne Chinn were both eliminated when they got into the wall in separate early-race incidents. ... A single caution flag slowed action in 11 preliminary races among three divisions.