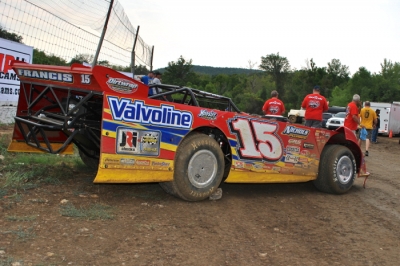 The car Steve Francis practiced in Thursday night is set aside for Friday's action. (DirtonDirt.com)

LOCUST GROVE, Ark. (Aug. 17) — After Thursday night’s Comp Cams Topless 100 practice session produced near track-record lap times, there was plenty of talk among drivers and crews in the pit area Friday about whether or not the track would produce similar speeds for the evening’s Lucas Oil Late Model Dirt Series preliminary action. | Complete Topless 100 coverage

With rain during the days leading up to this weekend’s $40,000-to-win event, and more rain and overcast weather earlier on Friday. Most seemed confident that Friday’s qualifying times would at least dip close to Billy Moyer’s long-standing track record.

With lap times reported to have been in the 12.5-seconds range Thursday night, if qualifying times are anywhere close to that, they’ll break Scott Bloomquist’s event qualifying record of 13.132 seconds set in 2008. Lap times are usually a bit slower at the Topless, an event that requires Late Models to run without roofs.

“It’s going to be ridiculously fast,” said hometown Billy Moyer Jr., who was at the track Thursday night, but didn’t unload for practice. “There’s no doubt it’ll be track-record fast tonight.”

Among the fastest cars Thursday night, Steve Francis of Ashland, Ky., also expects the track to be fast again for Friday’s prelims, but doesn’t expect the track to maintain high speeds for Saturday’s 100-lap main event.

In fact, Francis is so confident that the track will slow down by Saturday that he and his Barry Wright Race Cars house car team have elected not to run the car he was so fast in Thursday. They believe the team’s other car will be better for Saturday night’s slower track conditions.

“It was definitely fast, but we just don’t see the track staying like that all weekend,” said Francis, who scored a career-best Topless 100 finish of fourth last year. “There was some R and D stuff we were testing on the car, and we’re not so sure it would be the best option come feature time here tomorrow night. Sure, we might give up a little tonight, but we should be much better when it matters.”

There’s at least one driver betting on the track slowing down before tonight’s action. That’s overall track record holder Billy Moyer, whose four Topless 100 trophies put him tied with Bloomquist for the most wins in the event.

“From what I see, it’s going to slick up some,” said Moyer, who like his son Billy Moyer Jr. didn’t make laps Thursday night. “We haven’t had much sun today, but it’s starting to pop out. That should help slow it down some.”

The elder Moyer admitted he’d like to hold on to his long-standing record.

“Of course I’d like to keep it,” Moyer said with a smile. “To be honest though, I don’t know how someone hasn’t broke it already.”

Francis isn’t only eyeing a track record this week; he’s also looking to move by two-time series champion Scott Bloomquist for third in the Lucas Oil Series championship chase. While he’s still well behind points leader Jimmy Owens of Newport, Tenn., Francis would be pleased to end up third in the final series standings.

“Of course we set out on this deal with the goal to run for the championship, but realistically, if we can get by Scott and finish in the top three, that’s a good year for us,” said Francis, who was fourth in the final series standings last year following a switch from the rival World of Outlaws Late Model Series.

A third-place finish would also be a nice accomplishment for car builder Barry Wright, who teamed up with Francis this year and made a return to national tour competition.

“It’s an improvement for me from last year. And for Barry and Lance and these guys just getting back (on a national tour), it’s something we’ll definitely be happy with,” Francis said.

Jonathan Davenport of Blairsville, Ga., is looking for a solid performance this weekend to help turn around a recent slump.

With top-10 finishes in each of his previous three starts in the event, he’s confident he’ll have a solid run, especially after finishing seventh in last week’s $50,000-to-win Sunoco Race Fuels North-South 100 at Florence Speedway in Union, Ky.

The turnaround run, his first top-10 run on the Lucas Oil tour in nearly a month, came after a compete overhaul of the team’s equipment. While he’s running a different car than last week, Davenport is confident the car he’s in this weekend will perform better as well.

“We took the week before Florence off and just went through everything,” Davenport said. “I even took one car back to the jig just to make sure everything was right, and really just to ease my mind. We found a few things on both cars and it showed last week at Florence. I think we’re gonna see this car pick up some, too.

“We’ve got as good a chance (to run well) here as we would any where. This is a place I’ve always liked and generally run good at. Hopefully it’ll be good to use this weekend.”

Babb back in action

Former Topless 100 winner Shannon Babb of Moweaqua, Ill., is back in action this weekend after skipping last weekend’s North-South 100.

Babb, who scored his first-ever Florence Speedway victory during the track’s UMP DIRTcar Summernationals event earlier this summer, said the victory wasn’t enough to entice him back to Florence, a track he’s usually struggled at.

“I’ve been over there plenty of times and not done nearly as good,” Babb said. “I know people have won the Illinois lottery, too. That doesn’t mean they’re gonna win it again.”

Babb is happy to back at Batesville.

“I like Batesville and usually do all right here,” he said. “That’s why we’re here.”

A drop off among regional competitors was no doubt a factor that led to an event-low car count of 44 cars at this weekend’s race. But there’s one regional driver who didn’t mind making the trip.

After struggling with motor issues in a new Barry Wright Race Car for much of the season, Mississippi’s Neil Baggett is at Batesville for just his fifth appearance of the season.

“I just knew I really wanted to come out here an race,” Baggett said. “I don’t know what it is about the Batesville and the Topless; there’s just something about this place and this race that I love. My dad brought me out here to watch when I was a kid, and I’ve just always loved coming back.”