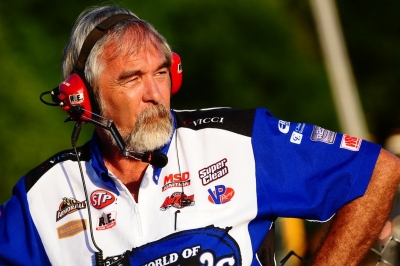 It was about 20 years ago when Georgia dirt racer Clint Smith talked to Jim Harrah about becoming an official on a national Dirt Late Model touring series. So Harrah shouldn’t have been too surprised when, during a phone call earlier this season from Smith, he received a similar request.

“I figured you were the only guy not doing anything,” Smith told Harrah, who didn’t taken offense.

“I jumped at the chance,” said the 51-year-old Harrah, now serving as the chief tech inspector for the World of Outlaws Late Model Series.

It’s the second time around for Harrah, who worked through most of the 1990s with the Hav-A-Tampa Dirt Racing Series, serving as tech inspector and then race director for the national tour launched by Mike Swims and Jimmy Mosteller.

“I loved it,” Harrah says, recalling his Hav-A-Tampa days. “It was the thing to do back then.”

The whiskers on Harrah's chin are a little grayer these days, but for those who remember officials during the Hav-A-Tampa heyday like Harrah, Nick Masters and Ozzie Altman, he’s a familiar site in the pit area at major touring events.

“I came in here and Bob Pierce said, ‘Where have you been hiding?!?’ ” Harrah said during WoO’s USA Nationals at Cedar Lake Speedway in New Richmond, Wis. Of course, in Harrah’s first stint on a national tour, Pierce was a driver. Now he’s hung up his helmet but builds chassis and assists his 15-year-old son Bobby, a racer who was an infant during Harrah’s final years with Hav-A-Tampa.

Harrah, who replaced the late Terry Watson with the World of Outlaws, says Pierce isn’t the only familiar face he’s seen. The Fayetteville, Ga., resident is long-time friends with Smith — Harrah first got started in auto racing building cars for Clint’s father, Roscoe — and fellow Georgian Shane Clanton. WoO regulars Rick Eckert, Chub Frank, Darrell Lanigan and other drivers were also well into their careers when Harrah worked with the Hav-A-Tampa tour, which eventually became UDTRA and then the Xtreme DirtCar Series before folding at the end of the the 2004 season.

“They’re old hands, too,” Harrah said. “Even the pit crew guys, they’re all about the same — just with different teams.”

Another familiar face to Harrah is 35-year-old Bub McCool of Vicksburg, Miss., the leading candidate in WoO’s Rookie of the Year chase. It was in 1996 that McCool, as a 19-year-old, tackled a national tour for the first time.

“Bub McCool was a real rookie then,” Harrah said with a smile.

Harrah has never gotten too far from racing, racing part time and working as an official at Atlanta-area tracks including Five Flags Speedway and Senoia Speedway. His work schedule building flight simulators offers him plenty of flexibility, so he was able to travel with the World of Outlaws.

The travel schedule is a little different these days, Harrah said. The Hav-A-Tampa schedule was mostly two-day events at a single track, usually on weekends. The WoO tour is a bit more far-flung and sometimes includes back-to-back weekday races.

Teching race cars isn’t too much different, Harrah said. Back in the 1990s, one of the big concerns was checking to make sure teams getting a weight break for using smaller cubic-inch engine weren’t using larger powerplant. These days the concerns are more related to making sure teams aren’t tampering with tires.

“These are a good group of people I work with now,” said Harrah, who still plans on doing a little racing of his own at Senoia when he gets a chance.