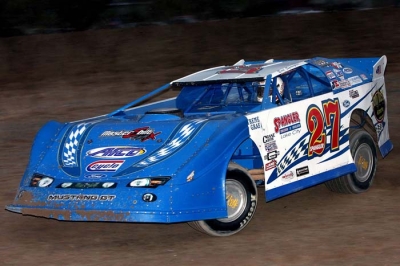 Like most regional or weekly drivers the week before a national touring series visits one of their home tracks, Eric Spangler of Lake City, Mich., can’t help but to be excited for this weekend’s World of Outlaws Late Model Series doubleheader at Winston Speedway in Rothbury, Mich., and Merritt (Mich.) Raceway.

Unlike most other regional and weekly drivers, however, Spangler is doing his best to ignore the extra excitement and approach this weekend’s events just like he would any other race.

“I’m gonna try to not get caught up in the hoopla of all those big-time guys coming to town,” said Spangler, the reigning Merritt champion who leads the track’s Late Model standings. “This weekend is no different than any other weekend. I’m gonna go and just do my own thing just like I normally do.”

Normal has been pretty good for Spangler so far this season. He’s won five races at Merritt, including both of the 3/8-mile oval’s special events. His $4,000 victory in the UMP-sanctioned Wood Tic event on July 21 and his Aug. 4 win in the track’s inaugural Allstar Performance Michigan Dirt Cup event has the 43-year-old racer excited about his chances this weekend.

Spangler knows being competitive this weekend will require full focus. Along with keeping concentrated himself, he’s already briefed his race team that being distracted by the national stars of the WoO tour isn’t an option.

“What I’ve seen people do, myself included in the past, is you have these big races and get caught up in it all and start gawking over the bigger teams,” Spangler said. “You’re checking out what they’re doing and you fail to concentrate on your own program.

“We’ve talked about it in a little team meeting this week. ... I told my guys that when the racing gets done they can do all the gawking and looking they want. But while we’re there racing, all of those guys are just like anybody we run against every week.”

After a 14th-place finish in last year’s WoO event at Merritt, Spangler is looking for better performances this weekend. He’s confident that the experience of running the Michigan Dirt Cup this season should help him and many of the tour’s other regulars to be more competitive against the national touring invaders they’ll face this weekend.

“On a local night, all of our top drivers from around here are spread out at several different tracks. But when that Dirt Cup series comes around we bring them all together,” Spangler said. “That’s gonna make you a better driver because you’re getting the chance to race against a little better competition than your normal weekly show and you’re going to a few different tracks all year.

“I think that’s really gonna help out us guys that follow it where when you come into these really big shows, you’ve already stepped your game up quite a bit.”

• Hometown driver J.T. Spence earned $2,500 for his Limited Late Model victory in the Tony Armel Memorial on Aug. 11 at Winchester (Va.) Speedway. “It means a lot to win this race not only for the Armel family, but my dad,” Spence said. “Our families have been close forever and it means the world to win this race for them.”

• Canadian driver Greg Belyea of Frankford, Ontario, won Aug. 11 at Brighton Speedway for his second in a row and fourth of the season.

• Dover, Pa., driver J.R. Rodriguez made a last-lap pass Aug. 11 at Susquehanna Speedway Park in Newberrytown, Pa., for his first career Late Model victory. Rodriguez led the first 22 laps, gave up the lead to Chase Billet for two circuits, then went back ahead to win the 25-lapper.

WDLMA: The 12 victories of Russ Scheffler of Waukesha, Wis., keep him out front in the title chase. He has 401 points, 30 more than Craig Schueffner of Sheboygan Falls, Wis.

WISSOTA: Chad Becker of Aberdeen, S.D., has a 74-point margin on two-time and reigning champ Ricky Weiss of Winnipeg, Manitoba, through Aug. 5 races. David McDonald of Huron, S.D., is 83 points behind Becker in third.

NeSmith Chevrolet Series: With 21 victories, Mickey Trosclair of Luling, La., maintains his points lead through Aug. 12 races. He’s got three-point edge on Chase Washington of Houlka, Miss., and a four-point margin on Jeremy Shaw of Millport, Ala.