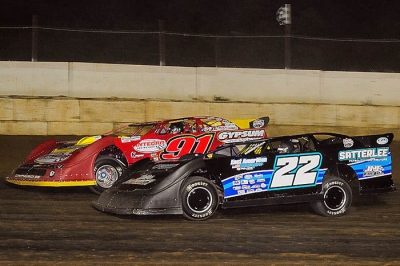 Nick Dickson of Lewistown, Pa., rallied from the eighth row for a runner-up finish ahead of early leader and big-block modified ace Billy Decker of Unadilla, N.Y. Jeremy Miller of Gettysburg, Pa., and Jamie Lathroum of Mechanicsville, Md., rounded out the top five. | Video | Slideshow

Devin Freise of Chambersburg, Pa., led from outset the front row in the 55-lapper, but the polesitter Decker took command on the fourth lap in his Hesston debut. Decker opened a lead while Friese and Satterlee battled for second, with Satterlee gaining the spot on the 10th lap.

Jason Covert, who started ninth, broke into the top five on lap 17, just before a lap-18 caution for a two-car incident in turn two.

On the restart, Satterlee challenged Decker while Covert gave chase. Satterlee worked past Decker to take over on lap 29 while Covert, Brian Tavenner and Lathroum held top-five spots.

After another yellow on lap 30, Satterlee stayed in command while the 16th-starting Dickson worked his way into contention in the low groove.

Covert began to fade, then stopped with a flat tire on lap 37, and Dickson continued his charge on the restart. Dickson took third from Lathroum on lap 38, then moved up to battle with Decker for many laps. Dickson reached the runner-up spot on lap 52, but it was too late to catch Satterlee as he wrapped up his first victory at Hesston.