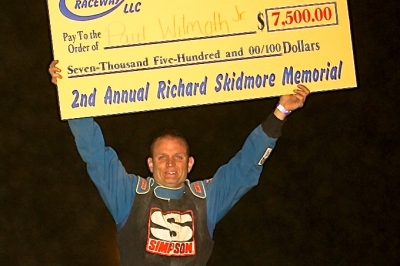 Wilmoth outran Stile to turn one on the race’s opening lap and took command as Hawkins, Covert and Shane Hitt ran third through fifth. The first caution came on lap 13 when Tim Senic rolled to a stop in turn two.

Satterlee made his presence known as he climbed from ninth to fifth on lap 18.

Wilmoth was still out front when the yellow again waved on lap 20 for Ron Delano’s trip over the embankment in turn three.

When the race resumed, Wilmoth was still in command while behind him Stile and Hawkins battled door-to-door for second and Satterlee was drove under Covert for fourth.

Wilmoth cruised the remaining distance taking the victory as Stile held on for second and Satterlee moved by Covert and Hawkins to finish third.