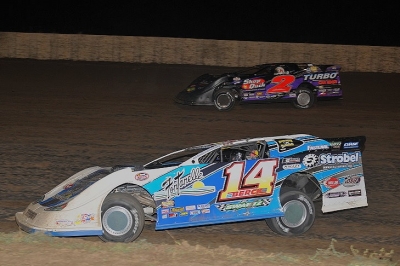 "I could go real high or real low, and that was to my advantage. I just went where he wasn’t,” the fifth-starting Berck said after rousing reception in victory lane. "Lapped cars played a huge factor into that.”

Stovall, who swept the previous weekend’s MLRA races in Humboldt, Kan., and Springfield, Mo., settled for second while John Anderson of Omaha, Neb., was third. Tommy Weder Jr. of Woodward, Okla., and Travis Dickes of Madison, Neb., rounded out the top five.

Stovall led the first 20 laps but couldn’t pull off a third straight victory.

“My car wasn't real raceable tonight. You just kind of had to be in that one groove,” Stovall said. "My car is more raceable in a situation when a track is real slick. All and all it was a good night.”