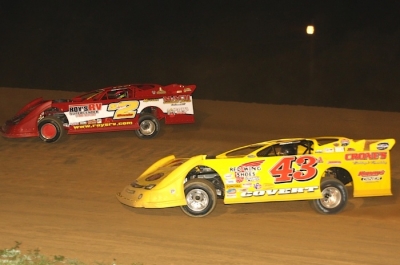 KERENS, W.Va. (Aug. 10) — Rain delayed Jason Covert’s victory Friday at Elkins Raceway, but it couldn’t stop the York Haven, Pa., driver from speeding to victory in the second annual Jim Hitt Memorial. Covert collected $5,000 in the unsanctioned special event for Super Late Models as the track opened one of its biggest weekend’s in history. | Video | Slideshow

Covert took the lead from hometown driver Tim Senic on the eighth lap and led the remainder of a 50-lapper slowed by five cautions, including one with four laps remaining.

Super Late Model drivers will return to Elkins on Saturday for the $7,500-to-win Richard Skidmore Memorial as Elkins paired two rained out specials on the same weekend.

Rick Williams of Beckley, W.Va., fresh off a $4,000 victory last weekend at Tyler County Speedway in Middlebourne, W.Va., finished second at Elkins on Friday while Jared Hawkins of Fairmont, W.Va., was third. Devin Friese of Chambersburg, Pa., was fourth and Senic, who led the first seven laps, rounded out the top five.

Rain nearly halted the Hitt Memorial for a second straight weekend as skies opened up just as cars were in the lineup chute for the main event. But track officials stuck it out and racing continued two hours later to get the show in.