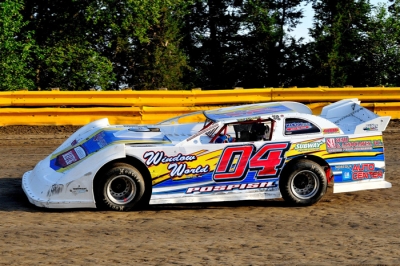 Tad Pospisil is enjoying his best season in a Late Model. (racedayprints.com)

Tad Pospisil is having the kind of season most weekly racers can only dream about. With 10 victories in 14 Limited Late Model events this season at Boone County Raceway, the 24-year-old Norfolk, Neb., driver has been nothing short of dominant at the 3/8-mile oval in Albion, Neb.

Pospisil, who’s also won at Riviera Raceway in Norfolk and U.S. 30 Speedway in Columbus, Neb., this year for a total of 14 victories, has all but locked up his second straight track championship at Boone County with two races remaining on the track’s schedule.

For his remarkable success this season, Pospisil credits long hours in the race shop tuning on his Lazer Chassis and setup help from veteran racer Kyle Berck of Marquette, Neb.

“We’re just hitting on all cylinders right now,” said Pospisil, whose previous best season was six victories in 2011. “We did a lot of research over the winter and a lot of talking with Kyle Berck. Without him, I don’t think we’d be having this great of a year. He’s been helping us and we’ve been doing a lot of work in the shop; that’s definitely turned our program around over the past two years.”

Pospisil has been strong all year at Boone County. With a 525 GM crate engine that was allowed in the division for the first time this season, Pospisil started the year off by winning three of the track’s first five races.

Pospisil’s success didn’t go unnoticed. In fact, it was partly to blame when track officials eventually rescinded the rule that allowed 525 engines in the track’s Limited Late Model division.

Forced to switch back to the Limited Late Model engine he ran in 2011, Pospisil never missed a beat and instead went on a streak of four consecutive victories.

“They had a challenge race that was a special race, and they wouldn’t let me bring my 525 motor down there,” Pospisil recalled of his first race without his 525 engine. “So we brought our Limited car and won by a straightaway that night. That was a great moral victory, and then we won like four out of five races with it.”

In addition to his regular racing at Boone County, Pospisil has stepped up to the Super Late Model division for a number of events this season.

Using his 525 engine, Pospisil has raced to four top-five finishes in eight starts against the open-engine Late Models of the Super Late Model Racing Series. His best finish on the Nebraska-based tour came on June 23 at Junction Motor Speedway when he raced to a runner-up finish behind Bill Leighton Jr. of Omaha, Neb., and one spot ahead of his mentor Berck.

“It’s pretty cool racing against those guys and finishing ahead of great drivers like (Berck),” said Pospisil, who believes racing on the SLMRS tour has led to dramatic improvements in his racing program. “It helps tremendously racing against the tougher competition. It makes me become a better driver and makes me spend all kinds of time studying to find ways to make the car faster. It’s just helped us 110 percent.”

With six more events left on the SLMRS tour’s 2012 slate, Pospisil plans to enter most if not all of those races as he gears up at a full-time run on the series next season.

“We want to finish up this year strong, but our goal is really to get ready to race with those guys full time next year,” said Pospisil. “Hopefully we’ll keep on improving and get even more competitive. I think we can at least finish in the top three in points (in 2013) and maybe even win a few of those races.”

• G.R. Smith of Mooresburg, N.C., captured his fourth straight weekly feature for Fastrak-sanctioned Crate Late Models at 311 Motor Speedway. Smith is unbeaten at the Madison, N.C., track since June 23 with the exception of his runner-up finish to Dennis Franklin in the $2,500-to-win special on July 7.

• Jeremy Miller of Gettysburg, Pa., won his first race of 2012 as he pocketed $2,200 for his Ernie Jones Memorial victory Aug. 4 at Roaring Knob Motorsports Complex in Markleysburg, Pa.

• Kevin Maher of McDavid, Fla., won Aug. 4 at Southern Raceway in Milton, Fla., for his first victory of the season.

ULMA: In scoring his ninth victory of the season over the weekend, Jason Russell of Henley, Mo., stretched his points lead to 91 points over Brandon Imhoff of Lake Ozark, Mo., while Joe Walkenhorst of Lee’s Summit, Mo., moved to third after winning at Valley Speedway.

WISSOTA: Chad Becker of Aberdeen, S.D., leads Todd Frank of Mellen, Wis., at the top with 1,510 points through July 29 events. Frank’s 1,412 points gives him a three-point advantage over Kyle Peterlin of Hibbing, Minn., for second.

NeSmith Chevrolet Series: Even with his two victories, Mickey Trosclair saw his points lead shrink to just three points over Chase Washington of Houlka, Miss. Duke Palasini Leland, Miss., is third, eight points out of the lead. The top six are separated by just nine points with eight weeks remaining in the chase for the $10,000 championship.

Elkins Raceway, Kerens, W.Va. (Aug. 10-11): Rainouts have set up perhaps the biggest weekend in track history with the $5,000-to-win Jim Hitt Memorial on Friday and the $7,500-to-win Richard Skidmore Memorial on Saturday.