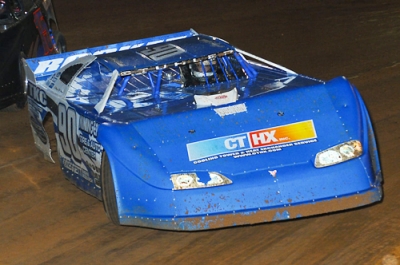 ”He had open heart surgery and he’s recuperating,” said Stuhler, who took the lead from Mike Atherton on the third lap and never looked back to earn $3,000. “He’s the one that puts all the money up for this deal. He’s not with us tonight, but we’re with him so I thank him and thank all my sponsors and my son for keeping this car nice looking. This is just a big effort by a bunch of people, I just get all the glory standing out here.”

The Greencastle, Pa. veteran lined up third in the heads-up start and after taking the lead from Atherton, Stuhler was in a league of his own, taking the checkered flag 3.66 seconds ahead of Tommy Armel in the 40-lapper.

Stuhler built a six-second lead on Atherton after 10 laps and getting into lapped traffic by lap 15, when he had three cars and five seconds separating him from Atherton when the first caution waved on lap 21. While Stuhler took off on the restart, Armel grabbed the runner-up spot as Atherton had Jamie Lathroum and Andy Anderson challenging with Anderson taking the third spot on lap 25.

Stuhler had stretched his lead to more than four seconds over Armel when another caution flag waved on the 31st lap and continued his dominance in the final circuits. Armel, Anderson and Atherton were followed by 11th-starting Covert. The race drew 42 cars and Winchester (Va.) Speedway hosts the $3,000-to-win second round on April 19.