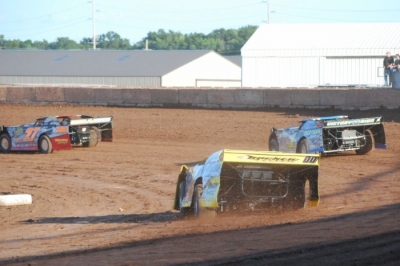 Completing a spectacular road trip to the upper Midwest, Lanigan registered a convincing victory in the Mid-States Equipment 50 to extend his record-setting win streak to six and become the national tour’s all-time winningest driver. | Slideshow

Lanigan, 42, of Union, Ky., roared off the outside pole to grab the lead on the opening lap and never looked back, pacing the entire distance to register his 13th win of 2012 and the 39th of his career on the WoO. He overtook Josh Richards and Billy Moyer to move atop the national tour’s career win list for both the modern era (2004-present) and overall (including the original 1988-89 seasons).

“It’s unbelievable,” said Lanigan, who captured Shawano’s WoO event for the second consecutive year. “It’s a real honor to be at the top of that (all-time victory) list. It means a lot.”

Behind the wheel of his Cornett-powered Rocket, Lanigan kept his rivals at arm’s length throughout the main event. WoO rookie Bub McCool of Vicksburg, Miss., was able to close within a car’s length of Lanigan late in the distance, but he couldn’t make a serious bid and crossed the finish line 0.214 of a second behind the victor in his Victory Circle mount.

Tim Fuller of Watertown, N.Y., briefly grabbed second from McCool on a lap-15 restart but settled for a third-place finish. It was his best outing since moving to the seat of the Kennedy Motorsports Capital Race Car. Brady Smith of Solon Springs, Wis., placed fourth and defending WoO champion Rick Eckert of York, Pa., finished fifth. Both drivers ran Team Zero by Bloomquist machines.

Lanigan led by nearly a straightaway early in the race, but he cooled his jets late in the race to make sure tire wear wouldn’t hamper his effort.

“I know last year there was some cars that blew out tires late in the race, so I was just trying to be conservative there at the end and finish,” Lanigan said. “Anytime you get to lapped traffic when it’s rubber, you don’t want to catch ‘em. I was just trying to slow the pace down a little bit.”

“I felt the longer the race run under green, we was getting better and better and I could get to (Lanigan) a little bit,” said McCool, who registered his seventh top-five finish of the 2012 WoO campaign. “But I don’t know if could’ve gotten by him. Hell, he was right down around that bottom in the rubber and it would’ve been hard to do anything.

“But with our last few finishes, we’re happy with anything in the top five. It was a good night for us.”

Lanigan’s $10,650 win put a put a cap on his perfect — and lucrative — three-race WoO swing. He began the trip on Aug. 4 with a $50,000 triumph in the USA Nationals 100 at Cedar Lake Speedway in New Richmond, Wis., and then outdueled Clint Smith of Senoia, Ga., to win Monday night’s 50-lapper at Independence (Iowa) Motor Speedway.

The checkered-flag hat trick was worth $71,350 and pushed his WoO earnings for the 2012 season to an astounding $269,400 after 30 races. He also extended his points lead to 170 points over Eckert as he chases his second career championship with 12 races remaining on the schedule.

Tim McCreadie of Watertown, N.Y., finished sixth after his attempts to make time on the outside of the track on the lap-30 restart caused him to fall out of the top five. Frank Heckenast Jr. of Frankfort, Ill., was seventh; Jimmy Mars of Menomonie, Wis., quietly moved forward from the 15th starting spot to place eighth; Vic Coffey of Caledonia, N.Y., finished ninth despite switching to a backup ignition halfway through the race and running the last 10 laps on seven cylinders; and Shane Clanton of Fayetteville, Ga., advanced from 18th to round out the top 10.

The race’s most significant casualties were polesitter Chub Frank of Bear Lake, Pa., who relinquished second place because of a broken rear end on lap three; Clint Smith of Senoia, Ga., who spun out of 10th place on lap 30 due to a broken J-bar bolt; and rookie Kent Robinson of Bloomington, Ind., who retired after cutting a right-rear tire while running fifth on lap 40.

Notes: Lanigan’s Cornett-powered Rocket is sponsored by Port City Racing, PRC and GottaRace.com. ... Thirty-seven cars were signed in for the event, which was run on brilliantly clear summer evening. The race had been postponed by wet track conditions following a thunderstorm on its original Aug. 1 date. ... Seventeen cars completed 50 laps. ... Among drivers failing to make the feature lineup: Mike Spatola, Ross Camponovo, Doug Blashe, Jerry Lierly, Dennis Erb Jr., Chris Oertel and Jill George. ... The next action for the WoO is a Michigan doubleheader on Aug. 17 at Winston Speedway in Rothbury and Aug. 18 at Merritt Raceway.