Records fall as Lanigan gets WoO win at Indee 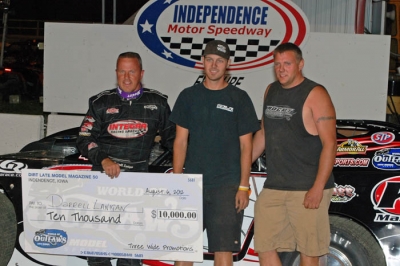 Continuing the most amazing season in the history of the national tour, the 42-year-old star from Union, Ky., set or matched three different series records with a hard-fought victory over Clint Smith of Senoia, Ga., in the 3/8-mile oval’s Dirt Late Model Magazine 50. | Slideshow | Video | Buddies' contact spices feature

Lanigan drew the pole position in the prerace redraw and led all but one circuit, but his drive to the checkered flag behind the wheel of his Cornett-powered Rocket was anything but easy. He had to survive a relentless late-race challenge from Smith, who nosed ahead to lead lap 42 but lost ground and fell behind for the remainder of the distance when the leaders rubbed together in turn two moments after Lanigan was scored the leader of lap 43.

Smith, 47, settled for a disappointing runner-up finish in his J.P. Drilling Rocket, crossing the finish line 0.330 of a second behind Lanigan. It was Smith’s second bridesmaid run to Lanigan in the last four races.

“I definitely had to work for this one,” said Lanigan, who passed Smith on the final lap to win July 13 at River Cities Speedway in Grand Forks, N.D. “Cat (Smith) had the best car at the end. He had the right rubber on and we were hanging on.”

Lanigan’s $10,650 victory was his fifth in a row, 12th of the season and 38th of his career on the WoO — all significant numbers in the history of the renowned full-fender circuit.

Lanigan also set a new modern-era record for consecutive wins — surpassing the four-race streaks authored by Eckert in 2006 and Tim Fuller of Watertown, N.Y., in 2009 – and tied Josh Richards of Shinnston, W.Va., for the top spot on the tour’s win list since 2004. In addition, he is now tied with Richards and Moyer for the most all-time WoO victories, including the 1988-89 seasons.

The milestone win almost slipped through Lanigan’s grasp. Smith, who started seventh, reached second by passing Chris Simpson of Oxford, Iowa, just before a lap-18 caution flag and proceeded to track down Lanigan like few drivers have been able to this season.

After caution periods on laps 29 and 36 stalled his charge, Smith stepped up the pressure. He moved to the outside of Lanigan and nipped the WoO points leader at the flagstand to lead lap 42, but Lanigan went back ahead by inches the following circuit and effectively gained control for good seconds later.

Just as it appeared that Smith was in position to surge completely ahead of Lanigan off the outside of turn two, Lanigan’s car slipped up the track and into Smith. Smith hopped over the cushion and lost his momentum, allowing Lanigan to power away with the lead.

Smith made a gallant attempt to rally for his first win of the season, but he couldn’t get closer than a car length over the remaining laps.

Brian Birkhofer of Muscatine, Iowa, finished sixth after climbed as high as fifth from the 10th starting spot. Chad Simpson of Mount Vernon, Iowa, advanced from the 16th starting position to place seventh; Chub Frank of Bear Lake, Pa., was eighth after using a provisional to start 23rd; Shane Clanton of Fayetteville, Ga., rose as high as fourth before fading to ninth at the finish; and Jason Feger of Bloomington, Ill., rounded out the top 10.

Five caution flags slowed the event, including a multicar tangle in turn two on lap nine that was set off by contact between Duane Treadwell of LaGrange, Ga., and Jason Rauen of Farley, Iowa.

The race’s other noteworthy incident came on lap 36 when Vic Coffey of Caledonia, N.Y., stopped on the backstretch with front-end damage from an apparent scrape with Frank. Coffey bumped Frank’s car into an infield tire when Frank attempted to pass by under caution and the two drivers exchanged pleasantries through the windows of their cars.

Thirty-three cars were signed in for the event, which was promoted by Rick Hartzell. The resident of Cedar Falls, Iowa, fields the Dirt Late Models that his wife, Jill George, drives in WoO events.