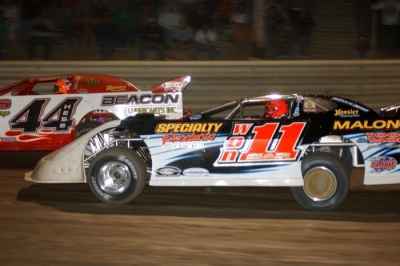 MILLERSBURG, Ohio (April 18) — Regaining the lead from fellow Pennsylvania driver Dave Hess Jr. with 11 laps remaining, Rob Blair of Titusville, Pa., earned $5,000 for his victory in the Independent Racing Series-sanctioned Deadline 50 at Hilltop Speedway. Blair, who started outside the front row, led 11 laps before the sixth-starting Hess took command. But Blair won a three-car duel among Hess and Tim Dohm to go back out front on the 40th lap and led the rest of the way in the series opener. | Slideshow

Last year's IRS champion Rick Aukland, who started ninth, finished second with Dohm, polesitter Doug Drown and Hess rounding out the top five. Provisional starters Ryan Markham and Wayne Chinn (in a backup car) rallied from the 12th row to finish sixth and seventh. Chinn ran as high as third before stalling on the 30th lap. The race was halted by eight cautions and a red flag for Mike Knight's flipping accident. The series rookie from Ripley, N.Y., was running third when he flipped in turn two.

Notes: Blair's Rocket Chassis is sponsored by Specialty Products and Maloney Tool & Mold. ... Lapped traffic made life difficult for the frontrunners throughout the race. ... Fast qualifier Matt Miller was knocked out of the race on the 24th lap after a tangle with Mike Balzano.