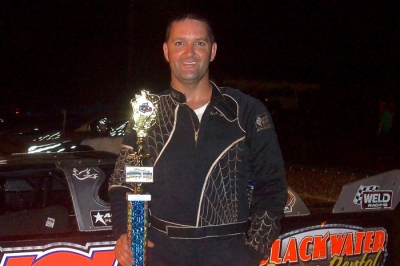 FLOMATON, Ala. (Aug. 4) — Shep Lucas of McKenzie, Ala. outlasted the weather and survived a rare mistake on the final lap to win the third annual Jarrod Johns Memorial Saturday night at Flomaton Speedway.

After a two-hour rain delay following the night’s preliminary action, Lucas took the lead from the outside pole on the start of the 20-lap race and held off fellow front-row starter Joseph Joiner of Milton, Fla., for the victory.

Lucas earned $1,500 in leading Joiner and hometown driver Josh Huss to the finish. Tracy Sutton, also of Flomaton, and David Odom of Century, Fla., rounded out the top five in the quarter-mile oval’s unsanctioned special event.

"I'm actually kind of surprised that I won this thing," said Lucas, who earned his second victory of the season at Flomaton. "The start is always important here and normally the bottom is the place to be. I didn't think I would get the lead starting on the outside and I knew it would be hard to pass.”

The start indeed turned out to be the crucial moment of the event as Lucas used top-side momentum to get out front before moving to the bottom a few laps into the race. The rest of the field followed suit as the high groove went away.

"I think the top was really better for the first few laps," Lucas said of the early portion of the race. "I was good up there for a couple laps but it went away pretty quick, and I had to get down."

Lucas built a comfortable lead early and looked to be ready to cruise to an easy win before Joiner began to close the gap. Joiner caught Lucas and looked under him before a spin by Monte Skinner of Saraland, Ala., brought out the race’s first caution with eight laps complete.

Joiner stayed close to Lucas through two more restarts during the race’s middle stages, but was never able to make a serious bid for the lead as Lucas logged smooth, consistent laps.

“I felt like we definitely had something for Shep, but it was going to take him messing up for me to get by,” said Joiner, who was looking for his third straight victory at Flomaton. “I knew whoever got the jump on the start would most likely win, and I hate I let him get me.”

Joiner had his own hands full late in the race as Huss pressured him for the runner-up position.

The battle for the second spot gave Lucas breathing room that came in handy when he made the mistake Joiner was looking for. On the final lap Lucas slipped out of the groove coming off of turn two and allowed Joiner to pull up to his back bumper going down the back straightaway. Lucas regained his composure, however, and closed the door going into turn three.

"My right-rear tire was gone," Lucas said. "Another lap or two and he would have probably got me."

Notes: Lucas’ Trak-Star Racecar is powered by a Jay Dickens Racing Engine with sponsorship from StorAll Buildings, Lucas Farms, Blackwater Canoe Rental, and X-treme Graphics by J-rod. … Lucas and Joiner have combined to win all four Super Late Model events held at Flomaton Speedway this year with each driver claiming two victories. … The rain delay allowed former track champion Kevin Mayer of McDavid, Fla., to arrive just in time to take up the tail for the start of feature after winning at nearby Southern Raceway in Milton, Fla. … Lucas earned the $100 fast-qualifier award sponsored by Airport Sports Center. … Lucas and Joiner each earned an extra $50 for heat race victories thanks to sponsorship from Sherwin Williams Painters Supply. … Super Late Models return to Flomaton Speedway on Sept. 3 for the Labor Day Shootout.