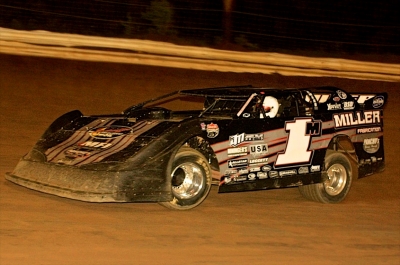 Jeremy Miller heads to victory at Roaring Knob for his first of 2012. (Tommy Michaels)

Miller set fast time, won his heat race and the dash, then led flag to flag in the 22-lap feature to score his first feature victory of the season.

Although he led every lap, the pole-starting Miller didn’t have much time to relax in turning back second-starting Jared Hawkins early in the race, then later holding off challenges from David Williams and Tim Senic.

Miller led the field into turn one at the drop of the green, hugging the inside as Hawkins rode the rim lap after lap. Hawkins of Fairmont, W.Va., raced side by side with Miller nearly every lap before breaking on lap eight and pulling to the pit area.

Williams of Charlotte Hall, Md., was next to challenge Miller, keeping pace with the leader after the restart to apply relentlessly pressure. Williams looked to be setting Miller up for the winning pass, but as the leaders charged into turn one on lap 17, As they crossed the Williams jumped the cushion with a flat tire sending him into the wall and ending his strong run.

Ninth-starting Senic of Elkins, W.Va., took over the second spot for the ensuing restart and hung on Miller’s tail in the closing laps. But Senic couldn’t find a way around and had to settled for second as Miller led to the finish.

Behind Senic, Mason Zeigler of Farmington, Pa., finished third with Devin Friese of Chambersburg, Pa., and Bob Gordon of Keyser, W.Va., rounding out the top five.

The race was considered complete after the drivers took the white flag on lap 21. The whole field then dropped to the bottom of the track and let Scott Rhodes pass by to take the honorary win for Ernie Jones. Rhodes’ car was painted and carried the No. 22 to resemble one of Jones’ cars.