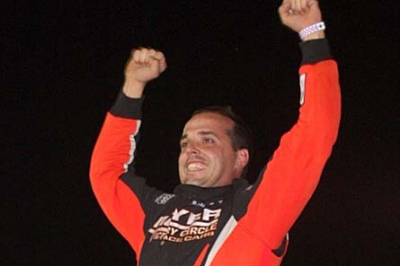 Stovall, who was leading Friday night’s MARS/NCRA race at Eagle (Neb.) Raceway before a flat tire knocked him from contention, got the jump on polesitter Jimmy Seagraves of Furley, Kan., on the start of Saturday’s 25-lap feature and never looked back.

Using the top side of the track, Stovall quickly built a half-straightaway lead over Seagraves and third-starting Tony Jackson, Jr. of Lebanon, Mo.

Jackson moved around Seagraves for the second on lap three before the first caution of the race fell one lap later when Rick Leatherman lost a drive shaft entering turn one.

Stovall again got the jump on the field on the restart while Jackson and fifth starting Tommy Weder, Jr. of Woodward, Okla., relegated Seagraves back to the fourth position. Stovall opened a full-straightaway advantage over Jackson by lap seven while seventh-starting Gary Gorby of Caney, Kan., worked his way up into the fourth position.

Lapped traffic first came into play on lap 10, but that didn’t slow Stovall down one bit as he kept pace over the rest of the field.

A couple slowed the pace midway through the race, including a wreck involving Gorby, who drifted high exiting turn two and hit the backstretch concrete to end his night.

After the final restart, there was no catching Stovall as he drove the rest of the distance unchallenged to pick up the victory.

Jackson topped a race-long battle with Weder for the runner-up finish while Chase Junghans of Manhattan, Kan., advanced from 14th to third after his heat race victory was disqualified when he came up light at the scales following the preliminary event. Sixteenth-starting Bill Leighton of Omaha, Neb., worked his way up through the field to round out the top five.

Notes: Stovall’s Victory Circle Chassis has a Scott Bailey Racing Engine and sponsorship from B2R Racing, Hatcher Auto Body and M&M Painting and Construction. … John Anderson of Omaha, Neb., won Friday’s race at Eagle Raceway, but wasn’t in the final rundown for Saturday’s event. … The Stovall, who leads the MARS points chase, has five victories on the MARS tour this year, including four wins in the past eight series events. … The NCRA tour returns to action Aug. 10-11 with a doubleheader at Junction Motor Speedway in McCool Junction, Neb. Friday’s $2,000-to-win show and Saturday’s $3,000 race will both be co-sanctioned by the Lucas Oil MLRA tour. .. The MARS Series next races Aug. 23 with a $5,000-to-win event at Highland (Ill.) Speedway.