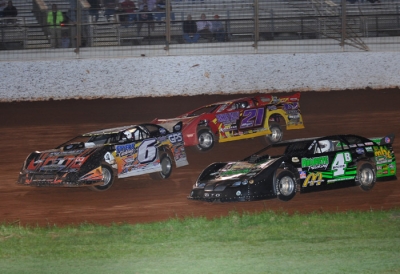 Breaking away from an early duel with fellow front-row starter Chuck Harper, polesitter John Gill pulled away for an easy victory. Gill's car trailed a little smoke in the final laps, but he didn't appear to slow. More smoke erupted when he slowed on the backstretch after the race's conclusion Third-starting Jeremy Miller finished a half-straightaway behind in second with Brian Birkhofer settling for the third and final transfer spot. Harper, who ran side by side with Gill the first few laps, faded to finish fifth.

Fourth-starting Jimmy Owens overtook Ricky Weeks heading for the white flag and captured the seventh heat. Weeks got the second transfer spot while fifth-starting Randle Chupp was third for the final transfer position. Eric Jacobsen, who started outside the front row and led early, finished fourth. Polesitter Vic Coffey, who briefly led early, pulled up on the fourth lap with rear-end damage and headed for the pits. Danny Johnson spun exiting turn two on the second lap to bring out the race's first caution. Brad Neat spun on the restart to draw another caution.

In the most exciting heat of the night, polesitter Chub Frank fought off Clint Smith and then Scott Bloomquist for a 10-lap victory. Smith nosed ahead in the early laps, but he slowed and pulled to the infield just before the race's midpoint as Bloomquist made slight contact exiting turn two. Bloomquist caught Frank and worked the inside groove against the high-running Frank. A lap-eight caution for debris set up a showdown to the finish, and Frank was able to hold on with Bloomquist a close second. Eddie Carrier Jr. finished third, holding off Brady Smith. Brian Shirley, who started fifth, pulled off the seventh lap.

Third-starting Josh Richards blew away the field, building a full straightaway lead over fellow second-row starter Chris Madden before a lap-seven caution for debris. Richards pulled away again on the restart for an easy victory over Madden while eighth-starting Darrell Lanigan got the third and final transfer spot, finishing just behind Madden. Shannon Babb was fourth and didn't get one of the three transfer spots, but he's guaranteed a feature starting spot by virtue of his victory last October at Lowe's. Damon Eller, who started outside the front row, finished fifth. It took a while to get the race rolling. Shane Clanton spun exiting turn two after a scramble back in the pack on the first attempted start. Polesitter G.R. Smith got sideways exiting turn two on the second start, losing his nosepiece and forcing him to pull out of the race.

Starting third, Steve Shaver made a last-lap pass of polesitter Ray Cook for a heat race victory. Cook finished a close second with Dale McDowell third. Cook jumped into the early lead and quickly pulled away, but Shaver was able to cut into Cook's lead when he occasionally got too high exiting turn two. Shaver pulled alongside Cook on the backstretch of the eighth lap, then completed the pass after they cook the white flag. Shanon Buckingham was fourth, far ahead of Dennis Franklin.

Jeep Van Wormer, inheriting the lead when Donnie Moran had a flat tire on a lap-six restart, barely held off Jimmy Mars for a victory. Bob Gordon, despite being part of two cautions, got the third and final transfer spot in a race where just five of eight starters were running at the finish. Moran's flat tire caused a frontstretch scramble on the sixth lap that ended up with Stacy Holmes spinning in turn two along with Gordon. Gordon had spun in turn four to bring out the lap-six caution. Mark Pettyjohn dropped out on the third lap. Mars got off to a poor start and initially appeared like he'd run far behind the field, content to get a few hot laps. But he restarted fourth after the lap-six scramble and nearly caught Van Wormer, the outside front-row starter, at the checkered flag.

Dan Schlieper, who started outside the second row, won an early duel with Rick Eckert and Tim McCreadie and pulled away for a half-straightaway victory in the 10-lapper. McCreadie, making his first 2008 start in the Steve Francis Racing No. 15, cut into Schlieper's lead late but finished second ahead of his car owner, Francis. Eckert ended up fourth in the caution-free event.

Fourth-starting Billy Moyer went immediately to the lead and pulled away for an easy victory. Polesitter Jackie Boggs finished more than a straightaway behind in second with Earl Pearson Jr. in the third and final transfer spot. Mike Marlar started inside the second row but ended up fifth behind Steve Lucas

Billy Moyer isn't done with his hot streak, yet. The Hall of Fame driver from Batesville, Ark., the winner of four of six World of Outlaws Late Model Series races so far in 2008, posted the fastest qualifying time among 69 entrants at the WoO-sanctioned Circle K Colossal 100 at the Dirt Track at Lowe's Motor Speedway.

Moyer will start outside the second row in his heat race after spinning a four on the inversion wheel. Moyer was followed unofficially in the qualifying list by Dan Schlieper of Sullivan, Wis. (14.977), Donnie Moran of Dresden, Ohio (15.008), Dennis Franklin of Gaffney, S.C. (15.072) and Chris Madden of Gray Court, S.C. (15.195).

Qualifying was held in groups of four cars at a time as track transponders were used to time the cars. ... Ronny Lee Hollingsworth of Northport, Ala., didn't qualifying after hitting the wall in hot laps. ... Mark Pettyjohn spun in turn four in front of Donnie Moran during his time trial, and officials gave the other three drivers an extra qualifying lap. Pettyjohn pulled off the track. ... Brent Robinson pulled into the infield and didn't take a qualifying lap. ... Cody Sommers of Ganassi Racing was piloting a Damon Eller backup car. ... Shane Clanton lost a right-rear wheel just as the green flag flew for his qualifying session. He pulled to the pits.