VanderVeen breaks through at Mount Pleasant 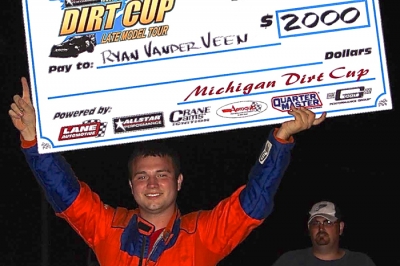 VanderVeen outran Brandon Thirlby of Traverse City, Mich., to the first corner on the initial start of the race and stayed out front for the duration of the 30 lapper to earn his first victory on either series.

Curtis Roberts of Coleman, Mich., followed VanderVeen across the finish line in the second position with Brian Ruhlman of Clarklake, Mich., third. Dona Marcoullier of Houghton Lake. Mich., finished fourth while Jeep Van Wormer of Pinconning, Mich., charged from the tail of the 22-car field to finish fifth. Thirlby faded to sixth at the finish.

Notes: Sponsors on VanderVeen’s race car include LeFever Builders, AFCO Racing Shocks, Napa Auto Parts and Miller and Associates. … Friday’s race was the sixth event for the first-year Michigan Dirt Cup. … The ALMS tour moves to Oakshade Raceway in Wauseon, Ohio, Saturday night while the MDC tour will be in action at Merritt (Mich.) Raceway.