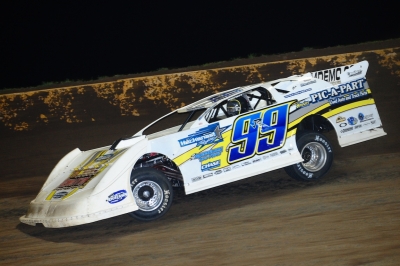 Frank Heckenast Jr. heads for a victory in the dash. (mikerothphotography.com)

Even the possibility of racing for another $25,000 to win Saturday’s World of Outlaws Late Model Series 100-lapper wasn’t enough to shake them from their prime positions. | Complete USA Nationals coverage

After Heckenast won Friday night’s 15-lap dash and Lanigan finished second to put them at the head of Saturday’s USA Nationals field, both drivers were given the opportunity to forfeit their spots and start from the last row as part of the tail-start challenge in celebration of the event’s 25th anniversary. Accepting the challenge would make them eligible to claim a $25,000 bonus — on top of the race’s already huge $50,000 first-place prize — if they could drive through the pack to win.

But even with the qualifying night’s big crowd urging them on following the dash, neither Heckenast nor Lanigan took the potentially lucrative gamble.

“No deal,” the 24-year-old Heckenast said when offered the challenge by WoO announcer Rick Eshelman.

“I’m a gambler, but there are too many variables out there with this racetrack,” Lanigan said when Eshelman posed the question. “I hate to let the fans down. Any other time I would’ve done it, but we gotta look at the big picture. I got my favorite car here tonight and I’m gonna play it safe.”

Both drivers will be given a chance to reconsider their decisions overnight. Cedar Lake Speedway officials plan to offer them one more shot to accept the challenge during Saturday evening’s opening ceremonies.

A competitor in the Dirt Late Model division for eight years, Heckenast earned his berth in the 10-car dash by finishing second in Friday’s second heat. He drew the pole position and dominated the event, racing virtually unchallenged for the entire distance in his Rocket machine.

Heckenast will make his second career start in the USA Nationals 100. He finished 11th in last year’s 100-lapper.

“I’m just tickled to death,” said Heckenast. “My goal today was just to make the race — you gotta make it before you can win it. We’re in the race and we start in the front, so we’ll take that.”

Lanigan was the biggest heat-race winner of the evening, capturing the third prelim by a convincing five-second margin. He started third in the dash, which featured the top-two finishers in each heat in a battle for USA Nationals starting position, and stayed in the spot until finally overtaking defending WoO champion Rick Eckert of York, Pa., for second place with a inside move through turns three and four on the final lap.

Eckert settled for third in the dash, Don O’Neal of Martinsville, Ind., was fourth and 10th-starter Jimmy Owens of Newport, Tenn., climbed forward to place fifth.

Rounding out the top 10 in the dash was Mike Marlar of Winfield, Tenn., and heat winners Brady Smith of Solon Springs, Wis., Billy Moyer of Batesville, Ark., Brian Shirley of Chatham, Ill., and Shannon Babb of Moweaqua, Ill.

With Saturday’s USA Nationals offering only WoO showup points, Lanigan will have no worries about ceding any of his commanding 152-point lead over Eckert in the tour’s standings. He will be laser-focused on adding a first-ever USA Nationals triumph to his resume.

Lanigan has been a serious contender in each of the last two USA Nationals, but overheating issues have plagued his efforts. In 2010 he started from the pole position and led lap one and laps 20-31 before his hot powerplant seized up on lap 75 while he was running third, and last year he advanced from the 18th starting spot to place fifth despite nursing his car late in the distance due to a hole in its radiator.

The evening’s most significant incident came on the opening lap of the third heat when Brandon Sheppard of New Berlin, Ill., slammed hard into the turn-two wall with the front end of his Rocket Chassis house. The machine sustained heavy damage but the 19-year-old driver was not injured.

Chad Simpson of Mount Vernon, Iowa, topped the event’s 53-car field in Ohlins Shocks Time Trials, turning a lap of 13.270 seconds for his third career WoO fast-time honor. It was his second fast time in as many World of Outlaws appearances this season, duplicating his qualifying performance on July 7 at Deer Creek Speedway in Spring Valley, Minn.

With the top 15 qualifiers inverted for the heats, Simpson started and finished third in the fifth preliminary. He will start 15th in the USA Nationals.

Saturday’s grand finale program, which includes consolation races, a last-chance race and the 100-lap USA Nationals plus a full show for Cedar Lake’s NASCAR Late Models, is scheduled to begin with hot laps at 6:30 p.m.