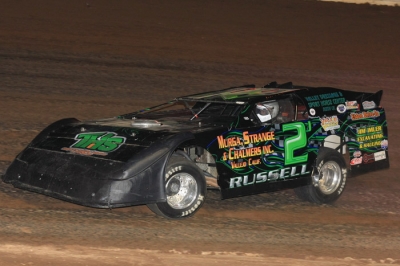 Jason Russell wasn’t sure what to expect going into his rookie Late Model season this year. But he sure didn’t anticipate to be leading the United Late Model Association points standings with eight victories just after mid-season.

But that’s exactly where the former modified standout finds himself after making a quick and smooth transition to competing in ULMA’s weekly Limited Late Model division.

“We really didn’t have any big expectations going into the year,” said Russell, 32, of Henley, Mo. “I wanted to win some races, but I didn’t really know how things were gonna go. We’ve got good equipment, but it was a whole new ballgame for me. We didn’t set our goals too high. We just went out hoping to win a few races.”

Russell, who previously spent 11 years driving modifieds with a handful of Late Model starts over the past two years, admits that he expected his move to full-time Late Model racing to be a bit more difficult.

“It really hasn’t been as hard as I thought it would be,” said Russell, whose ULMA-sanctioned victories have been split among weekly racing events at Callaway Raceway, Lucas Oil Speedway and Double-X Speedway. “We ran a modified for so long that I guess it helped where it wasn’t too big of a difference in Late Models.”

Russell feels his transition to full-fendered competition has been assisted by the ULMA rules package that limits engine and tire rules to help save race teams money.

While he’s made himself right at home in ULMA action this year, Russell has his eyes set on another transition later in his career. He’s focused on maintaining his ULMA points lead, but is also hoping to soon make the jump to open-engine Super Late Model competition.

“That was my goal when I first started racing,” Russell said. “We’ll see how it all works out, but that’s the master plan. I definitely want to make that a reality, but right now we’re focused on the ULMA deal and trying to win that. We’ve got a pretty good lead, but really anything can happen before it’s over.”

Russell’s season hasn’t been all smooth sailing. In fact, he’s hit a bit of a lull of late, going winless during the month of July. Although he managed four top-five finishes during that stretch, the winless streak was a bit of a let down for Russell after the strong start to the season. He’s hoping to get back to victory lane soon after finding and correcting what he believes may have been slowing him down.

“Here lately, we’ve kinda been losing forward bite in the feature,” Russell said. “I think we found the issue because we had a broken birdcage we found this week. I think that was our gremlin so hopefully we’ll be back to running right up front again.”

• Scoring a weekend sweep, Bobby Pierce of Oakwood, Ill., won July 27 at Tri-City Speedway in Pontoon Beach, Ill., and July 28 at Federated Auto Parts Raceway at I-55 in Pevely, Mo.

• In four races from July 26-30, Jason Hahne of Webster City, Iowa, won twice and was no worse than third in two other starts. His victories came in home-state runs July 27 at Crawford County Speedway in Denison and July 28 at Shelby County Speedway in Harlan.

• Tom Waseleski Jr. of Pengilly, Minn., has a streak of three straight victories at Hibbing (Minn.) Raceway after back-to-back weekend victories and a July 24 midweek special.

• On a night with double features at Merritt (Mich.) Raceway, Eric Spangler of Lake City, Mich., narrowly edged Brandon Thirlby of Traverse City, Mich., on July 28 in the first race, while Thirlby reversed the finish in the finale. Justin McNeil was third in both races.

• Winning his first-ever race at Selinsgrove (Pa.) Speedway, Dave Zona of Montross, Pa., took the checkers 2.4 seconds ahead of the field July 27.

• In a tribute to his late boss and father figure Keane Laakson, T.J. Adams of Hayward, Wis., won July 27 at Amsoil Speedway in Superior, Wis., for his first-ever Late Model feature.

UMP DIRTcar (Super Late Models): Brian Shirley of Chatham, Ill., continues to lead with a 113-point advantage over Shannon Babb of Moweaqua, Ill., through July 22 races. Kevin Weaver of Gibson City, Ill., is third, 172 points out of the lead.

IMCA: Reigning champion Ray Guss Jr.’s seven-race win streak at Quad City Speedway came to an end Sunday, but the Milan, Ill., driver stretched his lead from one to six points with a Saturday night victory at West Liberty Raceway. Todd Cooney, of Des Moines, Iowa, is second with Tyler Bruening of Decorah, Iowa, third, 32 points out of the lead.

ULMA: Jason Russell of Henley, Mo., continues to lead the way with 1,775 points through July 30 followed by Brandon Imhoff of Lake Ozark, Mo., with 1,687 points. Chris Hawkins of Neosho, Mo., moved to third over the weekend; he has 1,556 points.

WDLMA: Russ Scheffler of Waukesha, Wis., remains atop the standings with 345 points through July 28 races. Craig Schueffner of Sheboygan Falls, Wis., jumped Scheffler’s younger brother Rick over the weekend to move into second in the standings. Schueffner has 319 points to the younger Scheffler’s 316.

WISSOTA: Chad Becker of Aberdeen, S.D., has overtaken Todd Frank of Mellen, Wis., at the top with 1,510 points through July 29 events. Frank’s 1,412 points gives him a three-point advantage over Kyle Peterline of Hibbing, Minn., for second.

NeSmith Chevrolet Series: Mickey Trosclair of Luling, La., leads the way in top four separated by just nine points. Chase Washington of Houlka, Miss., jumped to second after scoring two victories and a runner-up finish over the weekend. Washington is five points behind Trosclair with Shannon Lee of Lumberton, Miss., and Ryan King of Seymour, Tenn., seven and nine points back.

Roaring Knob Motorsports Complex, Markleysburg, Pa. (Aug. 4): The inaugural Ernie Jones Memorial pays $2,200-to-win and $222-to-start (along with $222 to heat and dash winners). The race honors the man who co-promoted Roaring Knob and other tracks with his brother Rick Jones.

Flomaton (Ala.) Speedway (Aug. 4): Super Late Models will race for a $1,500-to-win payday for the Jerrod Johns Memorial Derby.