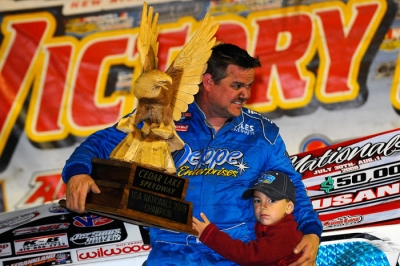 If a Dirt Late Model driver from Wisconsin wants to know what it feels like to emerge as a home-grown winner of their state's biggest event, they must consult Jimmy Mars. He is, after all, the only Dairyland racer who has captured the prestigious U.S. Steel USA Nationals at Cedar Lake Speedway. | Complete USA Nationals coverage

Mars, 40, of Menomonie, Wis., will tell his fellow Wisconsinites that there's nothing more exciting than winning the 100-lap USA Nationals, which celebrates its milestone 25th annual running at the end of a three-day extravaganza of speed on Aug. 2-4.

"It's definitely awesome to win it," said Mars, who topped the USA Nationals for the first time as an emerging star in 1996 and repeated more than a decade later, in 2009, after building one of dirt Late Model's most impressive resumes. "We've won a lot of big races, but our two USA Nationals wins definitely are special to me. When you win one of the biggest races in the country at a track close to home, it carries a little extra meaning.

"I pretty much grew up racing (at Cedar Lake). I watched a lot of the big name guys win (the USA Nationals), so to have my name right there in the record book with them is pretty cool.

"And being the only driver from Wisconsin to win it?" he asked. "That's pretty cool, too."

The USA Nationals, a $50,000-to-win spectacular that ranks as the richest event on the 2012 World of Outlaws Late Model Series, has become a Wisconsin short-track tradition since its birth in 1988. But the thousands of Badger State fans who annually attend the multi-day affair at the one-third-mile, high-banked oval haven't seen many standout performances by their Wisconsin brethren aside from those authored by Mars, who has nine top-five finishes in 16 USA Nationals starts since 1994.

For the most part, the USA Nationals has been dominated by an all-star list of out-of-state drivers. In addition to Mars, the race's win list includes five-timers Billy Moyer of Batesville, Ark., and Scott Bloomquist of Mooresburg, Tenn.; two-time victors Rick Aukland of Fargo, N.D., the late Jack Boggs of Grayson, Ky., Dale McDowell of Chickamauga, Ga., and Brian Birkhofer of Muscatine, Iowa; and single winners Donnie Moran of Dresden, Ohio, Davey Johnson of Latrobe, Pa., Rick Eckert of York, Pa., and Josh Richards of Shinnston, W.Va.

Just eight drivers hailing from Wisconsin have managed to claim a top-10 finish in a USA Nationals feature. Mars heads the group with 10 top-10s — almost as many as the other seven drivers combined.

Of course, there's a logical reason behind the relative lack of Badger State driver representation in the annals of the USA Nationals. With the race running under open-competition rules at a track — and in a state — where the Dirt Late Model division utilizes more restrictive spec-engine standards, many Wisconsin drivers face an experience gap in open-motor racing or don't have full-blown powerplants at all.

A prime example is four-time Cedar Lake Late Model champion Pat Doar of New Richmond, Wis., who has been entering the USA Nationals for nearly two decades but often at a horsepower disadvantage. His best finish in eight career starts is 13th, in 1996.

"We'd always show up there with one of those pea-shooter WISSOTA motors and we were just trying to get in the show and qualify," said Doar, who has won dozens of features at Cedar Lake. "You'd think I'd have some inside information about how to get around there — seems like sometimes I do, but it never really ends up paying off because I'll smoke the wall or something."

Doar figures to have his best shot ever at USA Nationals success this season. The 48-year-old veteran is in his second full season concentrating on open-motor racing as a regular with the WoO LMS and is coming off his strongest stretch of racing on the national circuit.

"We started running better the last few (races) leading up to Cedar Lake," said Doar, who tied his season-high WoO LMS finish during the recent Wild West Tour, placing fifth on July 12 at Red River Co-op Speedway in Winnipeg, Manitoba. "Hopefully it'll pay off when I get there and something will go right for us this year.

"If I could happen to win that one it would be a pretty cool deal," he added. "It's my home track and we've been racing there for way too long. I'd love to win that race."

Brady Smith, meanwhile, places the USA Nationals at the top of his personal to-do list. The 35-year-old might be Wisconsin's best hope for a checkered flag, too, considering his track record at Cedar Lake (he's reached victory lane there in the past and finished second in his last appearance there in UMP DIRTcar Summernationals action June 16) and his most recent WoO starts (two thirds and a four-place finish in the last three Wild West Tour shows).

"It would mean the world (to win the USA Nationals)," said Smith, who has qualified for the 100-lap headliner every year since 2004 except one ('10). "It's a race we've always wanted to win. It's right in our backyard and we've got an enormous amount of fans there, so it would be awesome if we could win that.

"We've been going there a long time, it's one of my favorite racetracks, and it's gonna be a huge event. It really is one of the most exciting events — just the buzz around the place, the fans ... they just really get into the event."

Another driver who could keep the USA Nationals trophy in Wisconsin is Terry Casey of New London, a former regular at Cedar Lake who has three career starts in the event. His best finish is 16th, in 2006, but he's been a contender.

"We led quite a bit of it one year and had some issues with a lapped car," said Casey, who missed matching his career-best WoO finish by one position when he placed fourth on July 13 at River Cities Speedway in Grand Forks, N.D. "That kind of hurt. Whether we would have won it or not, who knows? But it sure would mean a lot to win it.

"It's not my home track, but it's a track that I used to drive four hours every week to go race at. I spent two years going to race there, and I usually bring a lot of people (family and friends) there with me."

Several other Wisconsin drivers are expected to bid for glory in the USA Nationals, including A.J. Diemel of Navarino, Tim Isenberg of Marshfield, Jake Redetzke of Eau Claire and Adam Hensel of Barron.

The 2012 USA Nationals weekend kicks off Thursday with a $5,000-to-win Corn Belt Clash program before continuing with WoO time trials, heats and a dash on Friday and last-chance events and the 100-lapper on Saturday.

The weekend will also feature complete shows on Friday and Saturday nights for Cedar Lake's NASCAR Late Models with the winners walking away with $2,500.

Plenty of off-track activities will give once again give the USA Nationals a more-than-just-a-race feeling. Cedar Lake officials will accent the racing with an exciting array of pre- and post-race entertainment, including a Saturday-morning golf scramble at the nearby New Richmond Links Golf Course; a Ladder Ball competition in the wooded camping area at 12 noon on Friday; the popular Apple River Tubing expedition during the afternoons before the races; the Fans Fund Luncheon on Saturday afternoon that allows contributors an opportunity to meet the drivers they helped bring to the USA Nationals; a driver autograph session in the souvenir area prior to Saturday night's first green flag; gokarts in the backstretch parking lot; the Party in the Pits following the Thursday and Friday programs; the track's traditional dramatic driver introductions prior to the main event.

Advanced tickets for the USA Nationals are available by calling 612-363-0479 or by visiting www.cedarlakespeedway.com. Regular camping is sold out but additional spots have been added and can be purchased by calling the number above.

Fans who can't make the trip to Cedar Lake can still catch all the action through a live pay-per-view broadcast of the event over the web produced by DirtonDirt.com. Log on to www.dirtondirt.com for details.