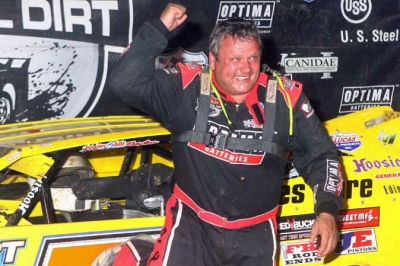 O’Neal, who was forced into his back-up car after suffering mechanical woes in hot laps, worked his way forward from his fifth starting spot and overtook the polesitting Francis on lap six of the 50-lap race.

O'Neal pulled away from Francis through the race’s middle portions as the two drivers distanced themselves from the rest of the field. But Francis started to reel O’Neal in late in the race as he went to the topside of the track to chase down the low-running O’Neal.

The two leaders then put on a show over the race’s final 10 laps, swapping the lead multiple times before O'Neal regained the lead for good on lap 46 and pulled away from Francis en route to becoming the seventh different winner in seven Lucas Oil Series events at Hagerstown.

"I have to thank the crew, they did a tremendous job getting the back-up car ready after hot laps,” said O’Neal, who last ran his back-up mount in March at Brownstown (Ind.) Speedway. “We had to change a lot on the car, and it was fast all night. We took off real good and I knew when I got past Scott (Bloomquist) there early we would have a good car. I had to move up on the track there at the end, because he (Francis) was fast on the outside.”