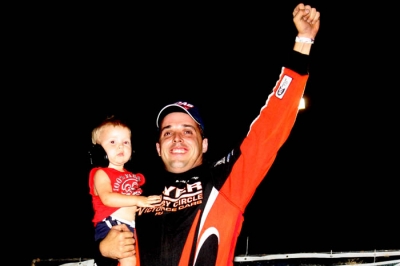 Stovall, who also won Friday’s MLRA event at Humboldt (Kan.) Speedway, was challenged early on in Saturday’s 35-lap feature by Tony Jackson Jr. of Lebanon, Mo., and late by John Anderson of Omaha, Neb. But the MARS points leader held off both challengers to score his first-ever Late Model victory at Springfield.

"It's awesome," said Stovall of his prosperous weekend. "To have a weekend like this is just unbelievable. It's a heck of an opportunity for me and we've worked our tails off."

Anderson, the MLRA points leader, used a lap-25 restart to climb from fourth to second and held the spot at the finish ahead of Matt Johnson of Archie, Mo., and Will Vaught of Crane, Mo. Jackson faded to fifth at the finish.

The race was slowed by only two cautions. Justin Wells had a flat tire on lap 14, and Chris Morelock was sideways in turn two on lap 25.

Notes: Stovall’s Victory Circle Chassis has a Scott Bailey Racing Engine and sponsorship from B2R Racing, Hatcher Auto Body and M&M Painting and Construction. … Stovall was coming off a pair of weekly victories the previous weekend at the reopened Mid-America Speedway in South Coffeyville, Okla., and Monett (Mo.) Speedway. … The MARS tour returns to action Aug. 3-4 with a doubleheader weekend at Eagle (Neb.) Raceway and 81 Speedway in Park City, Kan. … The MLRA Series has an Aug. 10-11 doubleheader at Junction Motor Speedway in McCool Junction, Neb., up next on its schedule.