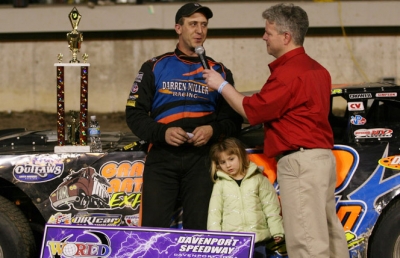 DAVENPORT, Iowa (April 16) — After a Dirt Late Model victory, you get used to hearing the winners. Thanks to the sponsors, the car worked great, we're really on a roll, blah, blah, blah. But after Darren Miller's victory in the World Dirt Racing League opener at Davenport Speedway, you get this: “I hate leading every lap here.” | Notebook | Slideshow

That takes a little explanation from the Chadwick, Ill., polesitter about his flag-to-flag victory in the Rudy's Tacos Fiesta 40 over Brian Birkhofer and Jimmy Mars at the half-mile Mississippi Valley Fairgrounds oval, his third straight WDRL victory at Davenport going back to last season.

But when you're as fast as Miller was — he was barely challenged and finished half-straightaway in front of the 17th-starting Birkhofer — he didn't have to worry about traffic or anything else as he cruised in the high groove.

“I didn't figure the way the racetrack was, if we weren't in traffic, I couldn't imagine anybody being good enough to pass me on the low side unless I really screwed up, so I was happy to see those cautions and stay out of the lapped traffic.”

Mars started outside the front row and held the second spot until Birkhofer took it from him following a lap-31 restart. Both drivers were piloting Mars Cars designed in the Menomonie, Wis., shops of Chris and Jimmy Mars.

Finishing a surprising fourth was Frank Heckenast Jr. of Orland Park, Ill., a second-generation UMP driver who got off to a solid start in his pursuit of the WDRL rookie crown. Heckenast, racing on the biggest track of his four-year career, barely held off Tim Lance of Brimfield, Ill. Tommy Elston of Keokuk, Iowa, ran third most of the race but pitted to replace a flat tire during the final caution and ended up 12th.

Birkhofer was on the move early, advancing to the sixth spot by the 15th lap, moving up to third by lap 25, and finally taking second from Mars. He never thought he had enough car to catch Miller, though. “I didn't really think I could get Jimmy,” Birkhofer said. “On that last restart, I got on the inside, and I could kind of make some good laps on the bottom.

“I think Darren's car right now, he's the guy to beat here. I've been really good here for a long time, and it's just a matter of time before the next guy takes his reign. But I think I'm going to knock on the door and get it. I'll win another one here eventually.”

Miller's Rocket Chassis has a Pro Power engine and sponsorship from Hawkeye Trucking, McLaughlin Freight Services, Ideal Ready Mix and Graphic Arts Express. ... Miller, who has five career WDRL victories at Davenport and 16 overall, is looking toward a fresh season after serious health problems last season when doctors discovered problems with his thyroid. He missed more than two months of racing. ... The feature was slowed by three cautions, none for serious incidents. Jason Utter got into the backstretch wall on the 15th lap, Denny Eckrich and Kerry Hansen tangled at the top of the frontstretch on the 24th lap, and Jay Johnson slowed on lap 32.

Wisconsin invaders Eric Pember, Jimmy Mars, Kerry Hansen won heat races during the World Dirt Racing League opener on Davenport Speedway's half-mile oval. Darren Miller of Chadwick, Ill., winner of the previous two WDRL events at Davenport, was the only home-state driver to break through in preliminaries for the Rudy's Tacos Fiesta 40. Miller topped Mars in the dash to earn the pole for the feature, coming up later in the evening.

In the first heat, the sixth-starting Pember quickly went into the lead and pulled away for an easy victory. Only eighth-starting Tim Lance was able to keep up as every starter in the first three rows faded. Rick Hanestad, who started with Lance in the fourth row, was third. Polesitter Jeremy Grady pulled out just after a mid-race restart.

In the second heat, Mars dominated after starting outside the front row. He built a straightaway lead on polesitter Pat Doar by the third lap and went on to win the caution-free 10-lapper by more than a quarter-lap margin. The runner-up Doar was also far ahead of third-finishing Jason Utter, who fought off a few challenges from Chris Simpson.

In the third heat, Hansen started outside row one, built a straightaway lead by the halfway point and cruised to a victory over Steve Ihm, who turned back several challenges from Chad Simpson. Brian Birkhofer, debuting a new Mars Car out of the Chris and Jimmy Mars shops, started fifth and fell back briefly before settling into a steady fourth. Polesitter Mike Stadel, a WDRL rookie candidate, started on the pole and faded from the outset.

The fourth-starting Miller dominated the fourth heat with a late caution erasing a quarter-track lead. Behind him, Kevin Kile was a solid second while Tommy Elston held off tail-starting Frank Heckenast Jr.'s late charge to finish third.

The Wednesday race was scheduled after an April 11 rainout. ... When drivers arrived in the late afternoon, they were greeted with 74-degree temperatures and sunshine on a breezy day, one of the nicest of the spring in eastern Iowa. ... Last year's WDRL champion Justin Fegers was a no-show. ... Matt Furman spun on the first lap of the first heat and was towed off the track. ... In the second heat, the last five cars of Tim Isenberg, Rob Moss, Ryan Dauber, Brian Harris and Andy Eckrich and in a pack most of the way, hitting the checkered flag in a tight bunch. ... In the final heat, Todd Davis got too high on the first lap and brushed the turn-four wall before coming to a stop. He retired from the race. Nick Marolf spun on the inside of turn four on the next attempted start. ... Jill George spun twice to bring out cautions in the fourth heat. ... WDRL racing is scheduled to continue on Saturday and Sunday with racing at Freeport (Ill.) Raceway Park and Quad City Raceway in East Moline, Ill.