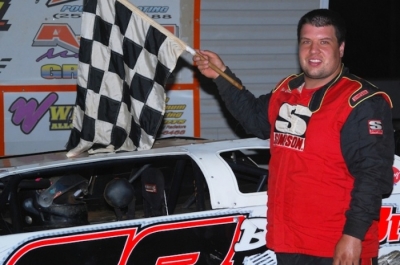 The polesitting Cooley held off challenges from second-starting Josh Putnam of Killen, Ala., before pulling away in traffic late in the race.

Eric Hickerson of Linden, Tenn., took second when Putnam slipped high in traffic late in the race, but the spot was given back to Putnam when Hickerson failed to go through post-race technical inspection.

Davie Gentry of Wheel, Tenn., rallied from the tail of the field to finish third after slowing to bring out an opening-lap caution. Jerry Owens of Killen, Ala., finished fourth.

Cooley took the lead on the first attempt to start the race, but the third-starting Gentry slowed on the backstretch to cause the race’s first caution before a lap was completed. The field lined up for a complete restart with Gentry tagging the tail of the field.

With Owens joining him on the front row, Cooley pulled back out front on the second start with Owens and Putnam giving chase.

Putnam moved to second on lap 10 before the race’s second and final caution waved a lap later when Michael Greer spun in turns one and two.

Cooley maintained control over the remaining distance, challenged only by Putnam until he was held up in lapped traffic. Hickerson took second when Putnam slid high in turns one and two late in the race.