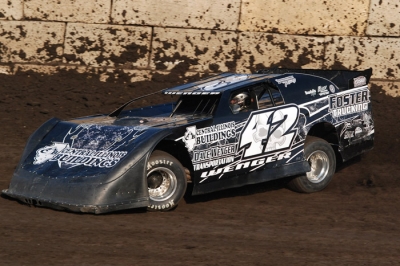 No matter what a driver’s previous experience, the transition to Late Model racing is rarely a smooth one. Rookie seasons often include a number of ups and downs as drivers attempt to master the learning curve of dirt racing’s top full-fender division.

As first-year Late Model pilot McKay Wenger has learned, the transition isn’t any easier when setbacks such as wrecks or engine troubles slow the process.

Halfway through his first season behind the wheel of a Late Model, Wenger has shown promise with a pair of victories in his hometown Fairbury American Legion Speedway’s UMP Super Late Model division. But each time he starts to get on a bit of a roll another setback seems to put him behind.

“It can get pretty frustrating when it seems like it’s just one thing after another when you’re just trying to get comfortable and learn the car,” said Wenger, 25, a former open-wheel modified standout.

Engine troubles with the used SB2 engine Wenger and his family-owned team started the year with were the first unforeseen obstacle of the Wenger’s rookie campaign. When the engine let go after just a handful of events, Wenger was forced to fall back on the powerplant he ran in his modified last season.

Using the underpowered modified engine has kept Wenger on the track for much-needed seat time, but it’s made being competitive much more difficult, especially during preliminary action when Fairbury’s quarter-mile oval tends to be heavy and hammer down.

“We just can’t get enough gear in the car to keep the thing wound up when the track’s muddy,” said Wenger, whose Pierce Race Car carries sponsorship from Foster Trucking, Central Illinois Buildings, Dave Wenger Transportation and Ralph Fehr Farms. “Then starting back in the pack just makes the work that much harder. You’ve gotta run up through traffic and try to avoid all the wrecks.”

Avoiding wrecks isn’t always easy. Such was the case this past weekend when Wenger advanced from his 10th starting spot into the top five early in Fairbury’s 30-lapper only to be involved in a tangle that turned Wenger’s car sideways in front of the field in the middle of the back straightaway.

After surviving a few hard licks in the resulting eight-car pileup, Wenger restarted from the tail of the field with what he thought was just heavy cosmetic damage. But after again rallying back into the top five, issues from the pileup eventually caused a part failure under the rear-end of his race car that left his car with a long list of rear-end and suspension damage.

The damage will likely force Wenger to sit out a few weeks in order to save money to buy new parts and make the required repairs.

“The car was already in pretty bad shape as far as the body and all, but now we’ve got a car with the body and nose off of it and we’re looking for a ton of rear suspension parts,” said Wenger, who estimated that his car needed about $3,000 worth of repairs before returning to the track. “We’ll have to set out a week or two, but we’ll fix her up and get back out there.”

Even with yet another setback, Wenger has kept a positive attitude as he looks forward to continuing his rookie season.

“It can get frustrating, but I’m just glad to be racing Late Models,” Wenger said. “I wish we had better equipment and a bigger budget to do some traveling, but we’ve been fast and we’ve got some wins. Those feature wins have driven us to the point where we can’t give up. We know if we’ve got a motor in the car and if we’ve got four tires on it, then we’ve got a shot at winning.”

• Taking a break from the World of Outlaws, hometown driver Pat Doar extended his streak of winning at least one Late Model feature each season to 14 years at Cedar Lake Speedway. His July 21 victory was the 46th of his career at the New Richmond, Wis., oval.

• Becoming the first driver to win the Dick Frye Memorial in back-to-back seasons, hometown racer Travis Smock won July 21 at Independence (Iowa) Motor Speedway. Sixth-row-starting Curt Martin took the lead on the ninth lap, but Smock tracked him down to take over just before a lap-20 caution. The race honored a long-time president of the Buchanan County Fair Association.

• Including a Deery Brothers Summer Series triumph, Ray Guss Jr. of Milan, Ill., has a six-race winning streak at Quad City Speedway in East Moline, Ill., after his July 22 victory.

• Taking the lead on the 13th lap when Brian Ruhlman broke, Devin Shiels of Britton, Mich., led the rest of the way July 21 for his first victory at Oakshade Raceway near Wauseon, Ohio.

IMCA: Reigning champion Ray Guss Jr. of Milan, Ill., leads Todd Cooney, of Des Moines, Iowa, by just one point as of July 19. Tyler Bruening of Decorah, Iowa, is third, 32 points out of the lead.

NeSmith Chevrolet Series: Mickey Trosclair of Luling, La., reclaimed the points lead after posting his 18th victory of the season over the weekend in a rare trip to Malden (Mo.) Speedway. Trosclair leads Shannon Lee by just two points while Chase Washington is eight points out of the lead in third.

Duck River Speedway, Wheel, Tenn. (July 28): Super Late Models will run topless in the $2,000-to-win Summer Sizzler, a 40-lap feature. Limited Late Models will also be in action along with a rare appearance for modifieds at Duck River.