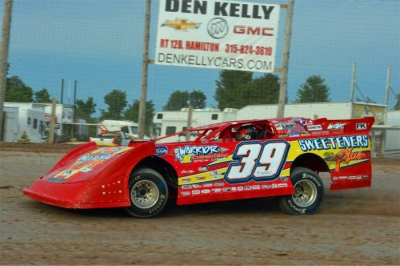 McCreadie, a regular on the World of Outlaws Late Model Series, earned $10,000 for the eighth Lucas Oil Series victory of his career.

“I know I said the same thing last year, but I love racing in New York,” said McCreadie the son of legendary big-block modified racer Bob McCreadie. “We’ve got a lot of my old crew and my dad’s guys are here and Craig. It’s usually just me and Craig, so it’s nice to come and home and have some extra help.”

Owens, the reigning Lucas Oil Series champion and current series points leader, advanced from his ninth starting spot and pulled even with McCreadie several times throughout the race. But he couldn’t quite clear McCreadie for the lead and settled for the runner-up finish for a second straight year at Utica-Rome.

Gregg Satterlee of Rochester Mills, Pa., charged from 18th after winning a consolation race earlier in the evening to finish third, earning his best career finish on the national tour. Pearson slid back to fourth at the finish while Don O'Neal of Martinsville, Ind., rounded out the top five after using a provisional to start from the 23rd position.

Polesitter Steve Francis of Ashland, Ky., pulled ahead on the start of the race, but Pearson used a strong run down the back straightaway to take the lead on the opening lap.

McCreadie took second from Francis on lap seven and made quick work of Pearson, moving by for the top spot just two laps later.

Owens charged into the top five early in the race and used a lap-14 restart to over take Pearson for second. The high-running Owens briefly pulled ahead of McCreadie just after taking second, but McCreadie pulled back ahead before a lap was completed.

McCreadie opened a comfortable lead during the middle stages of the race, but Owens stayed close after the races second caution on lap 31.

Owens again briefly pulled ahead of McCreadie on lap 32, but McCreadie used another strong run on the bottom to edge back ahead at the flag stand.

A number of lapped cars blocked McCreadie’s path in the run to the finish, but the veteran driver handled them deftly in pulling to a five-car-length lead by the end of the race.

Owens’ high-side charges reminded McCreadie of last year’s race at Utica-Rome, when he overtook Owens with his own top-side pass en route to victory.

“I was stuck in the bottom in the traction ring and I thought Jimmy was gonna do the same thing that I did to him last year,” McCreadie said. “But if you crab around the bottom there’s some good traction.”

Owens was disappointed to come up short, but enjoyed the side-by-side battle for the lead.

“I had a great car we just kinda set ourselves back qualifying,” Owens said. “The feature was a good race. Me and Timmy ran side by side and it was probably the funnest race I’ve had in a while. I’m never happy about second, but I had a good time tonight anyway.”

Satterlee would have liked to have had a few more laps to try improve his run through the field by a couple more positions.

“We just needed more laps,” Satterlee said. “We kinda caught McCreadie and Owens there at the end. I think we had something for them. But third place with these guys, I’ll take it. I’m real happy with how everything went tonight.”

Notes: McCreadie’s Warrior Race Car has a Pro Power Engine with sponsorship from Sweeteners Plus, Four Star Transmissions and Keizer Aluminum Wheels. … McCreadie became the 11th different winner on this year’s Lucas Oil tour. … The victory is McCreadie’s eight overall Late Model win of the season. … The race was slowed by two cautions. The first came on lap 14 for Dan Stone while the second was for debris on lap 31. … Because of imminent inclement weather, the third race of the New York tripleheader Thursday at Fonda (N.Y.) Speedway was cancelled Thursday morning.