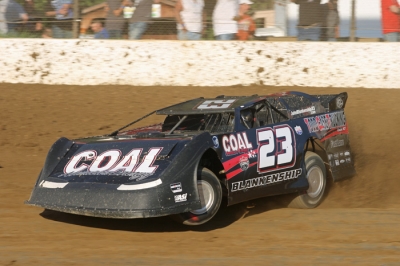 John Blankenship gets up to speed at Stateline, where he pocketed $10,000. (Todd Battin)

Blankenship officially led every lap in front of a huge western New York crowd to earn $10,000, but he had his hands full with the sixth-starting Knight, who pulled alongside a few times in trying to pull off his first five-figure victory.

“It was a good race,” said the 31-year-old Blankenship, who won at Stateline on the World of Outlaws Late Model Series in 2005. "I saw him come up on my inside and I was like, ‘Well, here we go.’ I went in the top and actually got a pretty good bite, so then I decided to run in on the top there that next lap there, and I never saw him again, but he had to be close.”

Knight finished just .270 seconds behind Blankenship after making challenges high and low amid traffic in the waning laps.

“It was down to the last five laps of the 50, and it was laying everything you had on the line, and everything you had you’d throw it out there and find every little bit of speed you could find to get him at the end,” said the 25-year-old Knight. "I came up just inches short of a lapped car and a couple of different things. I laid it all I had on the line. I hope it was a good show for the people.”

Blankenship built a health lead over Bloomquist early in the race as a series of cautions slowed the action, first for fast qualifier Tyler Reddick on the ninth lap. Other cautions appeared for Steve Francis and Eric Wells (lap 10), then three times the yellow waved on lap 17 first for David Scott, then Doug Eck and finally Gregg Satterlee.

The final 33 laps ran caution-free as Bloomquist fell behind Blankenship, and Knight took over the second spot on lap 29. Knight cut into the leader’s straightaway advantage amid traffic, briefly nosing ahead entering turn three on lap 48 before Blankenship reclaimed the lead exiting turn four. Knight took more stabs at Blankenship in the final moments, but contact with the wall exiting turn two helped the winner slip away.

“I was really struggling with the car. I was bouncing all over the place. We had a decent car, but it could’ve been a little easier to handle I think,” Blankenship said. "I like this place. It was a little choppy tonight. When I was here seven years ago or so it was real smooth and slick, so it was quite a surprise to us tonight.”