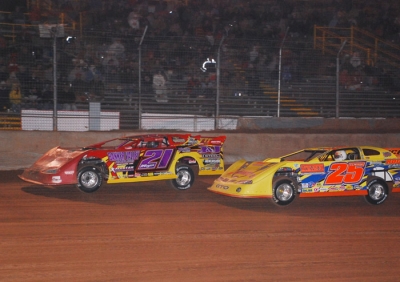 The 50-year-old Moyer, who started third, overtook polesitter Shane Clanton of Locust Grove, Ga., for the lead on lap four and never looked back. He raced virtually unchallenged to his fourth win in six WoO events this season, erasing memories of his rare loss on April 11 at Virginia Motor Speedway.

“We all know that you can’t win them all,” said Moyer, thinking back to his 17th-place VMS run that was dulled by a blown left-rear tire as he battled for the lead. “We had a tire problem (at Virginia Motor), but I don’t know if I’d have beat (eventual winner Jeremy Miller) anyway because he did a heckuva job. We just chalked it up as one of those nights, then went back to work and tweaked on the car a little more before coming here. We just keep making some small changes, playing with the whole chassis part of it, and keep getting it a little bit better.

“I think for the condition here tonight,” he added, “it felt pretty good.”

There’s no doubt that Moyer’s Banner Valley Hauling-sponsored Victory Circle M1 Chassis looked good on the four-tenths-mile oval, which opened its 2008 season with the mid-week WoO event. He pulled away following restarts on laps 21, 33 and 34 and handled late-race lapped traffic with ease en route to a victory margin of 1.663 seconds over Clanton, whose runner-up finish in the RSD Enterprises Rocket was his season-best on the circuit.

Once in command, Moyer seemed to have his car, which he famously helped develop in collaboration with the Bakersfield, Calif.-based Victory Circle shop, set on cruise control. “It’s a big tire game, a tire war going on out there, so I was trying to make sure I had (some tires) left if I really had to get after it,” said Moyer, who used Hoosier rubber on his Clements-powered car. “The car was good enough that I could run around there at 70, 80 percent and have something left if somebody got to pressuring me with 10, 15 laps to go. I didn’t want to run too hard and have my tires all sealed up if somebody challenged me. I was trying to keep that in mind.”

Of course, there was no true challenger to Moyer’s throne. Clanton, 32, led the first three laps of the race, but, while he put up a good fight, he wasn’t a match for Moyer’s speed. “When you get to a place like this it’s easier to follow than it is to lead,” said Clanton. “(Moyer) followed me for three laps, saw where my weak spots were, and then he went by me. When I changed my line and started driving in as hard as he was, it didn’t seem like he pulled me that bad. But he was a little bit better than I was – and on every restart, it took my car four of five laps to get going.”

Moyer pocketed $10,150 for the victory, his 10th overall of the young 2008 season. It tied him with Frank for fourth on the modern-era (2004-present) WoO win list, with 13 victories, and was his alltime-best 35th career WoO win (including the original 1988-89 seasons). In addition, Moyer registered his second career WoO win at Lernerville. He previous triumph came in a rain-shortened event on April 29, 2005 – early in a season that saw him capture his third tour title. “Everything’s going good and we’re making the right decisions,” bottom-lined Moyer, who leads the WoO standings and has already earned $64,000.

Clanton knows that Moyer is on top of his game, but he doesn’t see the veteran driver as being unbeatable. “I think he’s just got momentum and confidence,” said Clanton, who beat Frank to the finish line by less than half of a second. “Confidence is so important. I know, because my confidence is building. I’m finishing races now — and finishing up front. Maybe I can carry some confidence to Charlotte this weekend (for the $50,000-to-win Circle K Colossal 100 at the Dirt Track @ Lowe’s Motor Speedway) and run up front. I know that’s what Billy is gonna do.”

Frank, 46, nearly swept around the outside of both Francis and Clanton to snag second off turn four on lap 35, but Clanton held on to the position. That might have been the end of Frank’s hopes for a victory at his favorite track. “I was going by Clanton, and then (Francis) shoved him out of the way and (Clanton) took my lane away,” quipped Frank. “I got into Clanton a little bit on the frontstraightaway when I slid up. Maybe if I would’ve gotten by Clanton there (for second) I would’ve had something for Moyer. I don’t know, but I would’ve liked to try. With clear racetrack, my car was good.”

Francis, 40, was simply a bit off the fast setup for the feature. “We gambled and went a little softer on tires than everybody else and it didn’t work out,” said Francis, who took second from Clanton on lap 23 before ceding the spot back a few circuits later. “That’s just the learning curve I have with the (American Racer) tires.”

Eckert, 42, grabbed fifth from 13th-starter Darrell Lanigan of Union, Ky., on lap 30 and held the position to the finish. But he felt fortunate to maintain the spot during the race’s late stages because he ran the final 16 laps without his car’s fifth-coil, which fell off his car during a lap-34 caution period and left him devoid of traction for the remaining distance.

Finishing in positions 6-10 were Lanigan, who climbed as high as third; Josh Richards of Shinnston, W.Va., who struggled with a push condition after five consecutive green-flag laps; Brian Shirley of Chatham, Ill., who ended a string of three straight finishes of 19th and worse; Mike Balzano of Parkersburg, W.Va., who earned the $500 WoO Bonus Bucks for being the highest-finishing driver who’s never won a tour event; and Jeep Van Wormer of Pinconning, Mich.

Among the race’s casualties were Gypsum Racing teammates Tim Fuller of Watertown, N.Y., and Billy Decker of Unadilla, N.Y. Decker was the race’s first retiree, while Fuller’s promising run deteriorated quickly after his turn-four spin on lap 33 knocked him from eighth place. One circuit later Fuller ran into the back of the slowing Dave Hess Jr. of Waterford, Pa., on the backstretch, crushing his car’s nosepiece and forcing him out of further action. — Kevin Kovac

Talk about a way to start the night off. Polesitter Steve Francis jumped out to the early lead, and soon found World of Outlaws point leader Billy Moyer on his rear deck. While it appeared that Francis would keep the current World of Outlaws point leader at bay, it came down to the final lap, where Moyer used the ultra-high groove to nip Francis at the line by three-hundredths of a second in a photo finish.

A scary start to the start of the second heat, as rookie contender Joe Isabell violently flipped his machine in turn three. After the complete restart, outside polesitter Matt Lux took command of the race and never looked back. It was a different story behind him, however, as Eckert, David Scott, Chub Frank, and Alan Dellinger all battled for position. Eckert ended up second, while Frank was third, and Scott fourth.

Second-starting Shane Clanton rocketed past Shannon Babb on the first lap to establish the tone, but was soon challenged by Doug Horton, who pulled alongside Clanton a number of times during the 10-lap heat race. Horton looked poised to pull the pass off on the last lap, but a lap-nine caution flag negated that, as Clanton was able to pull away on the green-white-checkered finish. Behind the top two, Tim Fuller was able to slip past Babb on the last lap as the two swapped the third and fourth spots.

The front row held steady, as New York driver Vic Coffey put Josh Richards behind him at the start, and led all 10 laps for the victory. Behind the top two, Mike Balzano moved from fourth to third, while Jeep Van Wormer moved up a spot from fifth to fourth.