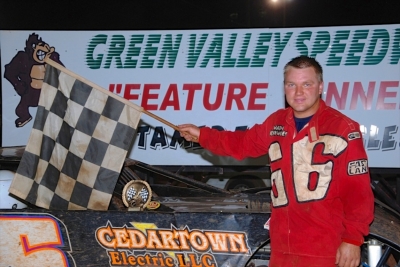 GLENCOE, Ala. (July 21) — Jake Knowles of Tyrone, Ga., emerged from a lap-23 tangle with race-long leader Josh Putnam of Killen, Ala., and third-running T.J. Alford of Ball Play, Ala., with the lead in Saturday’s Super Late Model feature at Green Valley Speedway and led the remaining distance to score his first victory of the season. | Slideshow

Knowles earned $2,000 at the high-banked, 3/8-mile oval in topping Alford, who also survived the lap-23 tangle to finish second. Joe Armistead of Sharpsburg, Ga., finished third in the caution-plagued race with Shane White of Athens, Ala., and Doug King of Anniston, Ala., rounding out the top five finishers.

The second-starting Putnam took the lead over the polesitting Alford on the start of and held the top spot through eight cautions that slowed the first half of the 30-lap race.

Knowles moved to second around halfway and began to look for a way around Putnam.

But Putnam held on to the spot for a number of laps until he tangled slightly with the lapped car of D.J. Hayes in turn two on lap 23. Putnam’s loss of momentum allowed Knowles to slip by for the lead. But Knowles got too high down the back straightaway, and Putnam pulled back alongside for the lead.

Putnam edged back out front of Knowles in turns three and four, but contact from third-running T.J. Alford turned Knowles’ car into the right-rear of Putnam’s, turning Putnam into the wall on the front straightaway and collecting the on-coming car of Robert Gant.

The accident, which brought out the race’s ninth caution, ended both Putnam and Gant’s nights, while Knowles and Alford continued running.

One more caution slowed the pace in the final run to the finish as Knowles held on for the victory.

Notes: Knowles’ sponsors include Cedartown Electric, Ruby Woods Appliances and Home Furnishings, JTS Converters, TA’s Automotive Machine, Racing Warpaint and GW Performance. … William Thomas of Phenix City, Ala., and Shep Lucas of McKinzie, Ala., both ran among the top five early in the race before running into trouble. Lucas slowed to bring out a lap-eight caution while Thomas suffered front end damage when he jumped the cushion on lap 10 and slowed to bring out another caution two laps later. … The track's planned reconfiguration has been delayed because the concrete wall sections initially delivered were more than a foot too short. … Green Valley Speedway returns to action Aug. 4 with a full racing program highlighted by another $2,000-to-win Super Late Model feature.