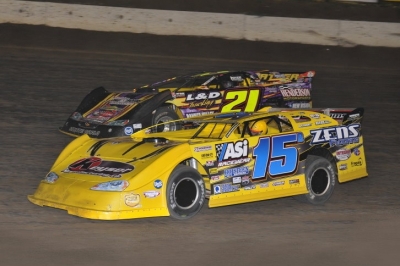 GREENWOOD, Neb. (July 21) — Brian Birkhofer’s dry spell through the first half of the 2012 season is suddenly a distant memory. A $26,000 victory will help do that.

The polesitting Birkhofer slipped away from a back-and-forth, side-by-side duel with Billy Moyer over the first 11 laps and cruised the rest of the way, surviving a few minor skirmishes to win the 80-lapper with at least a half-straightaway margin on his closest pursuer most of the way.

“Starting on the front row, starting position has been key, especially against this caliber of guys that are here,” said Birkhofer, who clicked off his third victory since ending a long drought on June 29. "It’s just great to get a big win. The racetrack was awesome once again. I don’t know how you could get a better racetrack than that one right there.”

Seventh-starting Scott Bloomquist of Mooresburg, Tenn., took second from Steve Francis of Ashland, Ky., with five laps remaining, but he had no hope of catching Birkhofer at the 4/10-mile oval. Jimmy Owens of Newport, Tenn., rallied from his 16th starting spot and challenged Francis for second, but he slipped back to fourth at the finish while last year’s race winner Don O’Neal of Martinsville, Ind., finished fifth after holding the second spot in the first half of the race.

"I can't thank Zach and T-Ray enough,” Birkhofer said of his crew members. "I want to thank the Kosiskis. I think they have a jewel of a racetrack here. If someone doesn't like coming here to race, they don't know what racing is like.”

Bloomquist, who was running fifth at the race’s midpoint, caught Francis late in the race but had to settle for a runner-up finish in his first visit to I-80 Speedway.

We (Francis) him down and went by and went on, and looked like we were catching Brian, but hat’s off to Brian,” Bloomquist said. "He did a good job all weekend. He unloaded with his stuff right, won both of his heat races.”

Francis, who struggled in Thursday’s practice but progressed enough to finish third, was glad for his turnaround at a track where he won on the UDTRA DirtCar Series 10 years earlier.

"Birkhofer’s been the class of the field since he unloaded here Thursday night,” Francis said. "I think we all knew that going in. He could just sit there and make the same lap times all night long. His car really rotated around that bottom good and was excellent. Tribute to him and his guys. I know they struggled some and it seems like they got their program back together.”

Birkhofer’s double-heat race victories in the quirky race format gave him the most passing points to start on the pole, but he faced early challenges from Moyer as they swapped the top spot a few times in the early laps. Birkhofer went ahead for good on lap 11 and ran unchallenged through the first half of the race as Francis took the second spot from Moyer on lap 39, just before a lap-40 caution appeared for Dave Eckrich.

On the restart, O’Neal made a bid for the lead down the backstretch, making slight contact with Birkhofer in turn three. But it didn’t faze Birkhofer as he pulled away once again to lead by a huge margin before the final yellow flag flew on lap 51 when Wendell Wallace stopped in turn two.

Birkhofer again edged away on the restart while Francis held the second spot, and Owens used the high groove to grab the third spot on lap 53. But Owens spent several laps trying to maneuver past Francis before losing a spot himself to Bloomquist with 10 laps remaining.

The outcome was virtually decided by then as Bloomquist worked past Francis for second on the 75th lap of the race slowed by three cautions.

The first yellow appeared on the first lap when John Anderson and Jared Landers tangled between turns three and four.

Notes: Birkhofer's MB Customs chassis has a Pro Power engine and sponsorship from J&J Steel, Zens Flooring, Baileigh Industrial, ASI and Port City Racing ... Birkhofer’s Zack Frields was the Sweet Mfg. Crew Chief of the Race. ... Birkhofer led 76 of 80 laps; Billy Moyer was scored as the leader on laps 6 and 8-10. ... Jimmy Owens got the Optima Batteries Hard Charger honors with his 16th-to-fourth run. ... The race lasted just over 44 minutes. ... Next up for the Lucas Oil Series are three $10,000-to-win events in New York starting with July 24th’s Empire 50 at Stateline Speedway in Busti. The next two nights finds the tour at Utica-Rome Speedway in Vernon and Fonda Speedway.