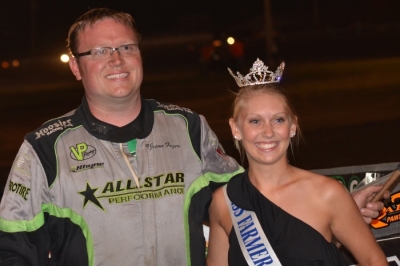 FARMER CITY, Ill. (July 20) — Jason Feger of Bloomington, Ill., raced to a $5,000 victory in Friday’s Farmer City Pride 50 at Farmer City Raceway, leading every lap of the unsanctioned event that was rescheduled from July 6.

The second-starting Feger turned back several late challenges from polesitter Brandon Sheppard of New Berlin, in racing to his fifth overall victory of the season. | Slideshow

Sheppard, who has driven the Rocket Chassis house car full time since early May, was back in his family-owned No. B5 for the home-state event, but couldn’t find a way around Feger while the two leaders raced through heavy traffic during most of the second half of the race.

The race’s only caution appeared for a pileup involving Bobby Pierce, Joe Harlan and Daniel Flessner with four laps remaining, giving Feger clear track for a final run to the finish. Feger pulled away on the restart and cruised to the victory.

Sheppard settled for the runner-up finish followed by Dennis Erb Jr. of Carpentersville. Kyle Logue of Oreana, and Billy Drake of Bloomington, rounded out the top five finishers.

Notes: Feger's Pierce Race Car is powered by a Rhyne Competition Engine and sponsored by Chizmark Larson Insurance, Pro Tire & Automotive, Jaxon Chase Steel Detailing, Box Seat Motorsports, Mulligans and Stearn Ironworks. … The event was originally slated for July 6 in place of Farmer City’s UMP DIRTcar Summernationals event that was moved to Quincy (Ill.) Raceway due to a financial dispute between the management of Farmer City Raceway and World Racing Group, UMP’s parent company. … The victory is Feger’s second this season at Farmer City. The first came in a weekly event on April 6. … Feger’s other three previous victories all came in Summernationals action during the past month.