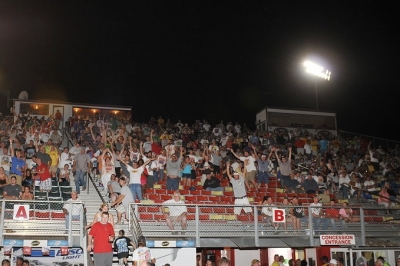 A healthy crowd turned out for Friday's prelims at I-80 Speedway. (fasttrackphotos.net)

GREENWOOD, Neb. (July 20) — Steve Francis of Ashland, Ky., had a blunt assessment of his performance during Thursday night practice at I-80 Speedway preceding the $25,000-to-win Silver Dollar Nationals.

After clicking off a victory and a runner-up finish in the track’s unique double-heat race format, Francis hopes he can make something happen from his third starting spot in Saturday’s 80-lap feature event, co-sanctioned by the Lucas Oil Late Model Dirt Series and Lucas Oil Midwest LateModel Racing Association.

“If we can gain as much tomorrow as we did from last night to today, I think we’ll be in pretty good shape,” said Francis, who has struggled with the event’s hard-tire rule. "It seems to be the slicker and slower the racetrack gets, our car seems to start evening out with everybody else.

"When it’s really fast, we struggle on hard tires. We did it at (Lucas Oil Speedway in) Wheatland (Mo.), we did at Tri-City (Speedway in Pontoon Beach, Ill.) when it was really fast.ï¿½ We just aren’t as good on hard tires for some reason. We’re doing something wrong in that — we gotta kind of go back to the drawing board on qualifying and things like that.”

The national touring Lucas Oil Series competitors typically compete on a variety of tires — including Hoosier’s 1600 hard tire instead of the WRS2-55 tire of a similar compound — and that’s meant making some adjustments to compensate, Francis said.

“None of us guys that run the Lucas stuff very much, we don’t know how long this WRS tire will last, how much abuse you can give to it, how much you can cut it up before it chunks out,” said Francis, who won at I-80 Speedway on the UDTRA circuit 10 years ago. "We know all that stuff on a 1600, but on a WRS2 we don’t necessarily know all that, and that’s where the locals have a little bit of an advantage. It’s going to be tire management. I don’t think a guy wants to go out there and run against what little bit of cushion there is out there for 80 laps — I think he’s going to be out of tire by lap 40. They said that’s kind of the way it played out last year.”

Brian Birkhofer of Muscatine, Iowa, recently ended one of the longest dry spells in his career with a couple of victories on the UMP DIRTcar Summernationals circuit, and he’ll try to continue his improvement Saturday while starting on the Silver Dollar Nationals pole. Birkhofer won both of his heat races at the 4/10-mile oval on Friday.

“We were pretty good last night (in practice) and we changed some stuff for tonight and hot-lapped,” Birkhofer said. "I gassed up in the first heat there and felt pretty good, and we just adjusted a little bit for that second one. Tomorrow night I’m thinking (the track surface) is going to get a little more black, so hopefully I don’t overthink it. I know there’s a lot of fans of mine going ‘Don’t work on it too much,’ so I’m going to try not to work on it too much.”

Birkhofer says keeping a balanced car is key for success at I-80, and with a vacation to the Wisconsin Dells planned for next week, he hopes to leave Greenwood with a little extra spending money.

“We’ve just kind of found the mojo finally, and I’m able to stay in a window and do small changes rather than going home and reinventing the wheel every week, because that gets frustrating and you have no confidence in anything,” he said. "I’m starting to have confidence in my actual car, and maybe a little bit in myself in driving it, so that’s the biggest thing.”

Don O’Neal won last year’s Silver Dollar Nationals fielding the Illinois-based Moring Motorsports car, but he entered this year’s race in his familiar No. 71 MasterSbilt house car. While he had a victory and runner-up finish in his heat race starts on Friday, he’s not confident that he has the best car at the racetrack.

“There are a couple of race cars a little better than we are, I think,” O’Neal said. "To have a shot at winning, we’ll have to pick our game up a little bit. We’ll have to wait and see tomorrow, I guess.”

What will it take to repeat last year’s victory?