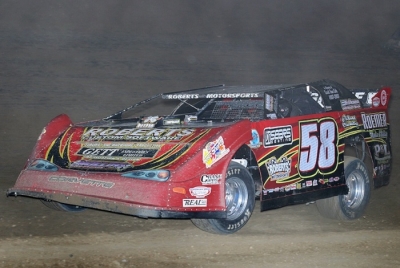 EAST MOLINE, Ill. (July 18) — Ray Guss Jr. came through in the most important race on his schedule. Again.

Roberts, a former IMCA Late Model driver, owned the car Guss drove to series and national IMCA championships in 2010 and 2011. The main event was 58 laps in honor of Roberts’ car number.

Justin Kay followed the lower line and led the first 40 circuits most of them with pole starter Todd Malmstrom in hot pursuit and Mike Cothron and the 11th-starting Guss on the top side.

Following a lap-nine caution for debris, the race stayed green until Gary Webb slowed on lap 38 to bring the yellow out and bunch the field back up.

Malmstrom found his way around Kay following the restart and was still up front when Guss made a serious bid of his own for the lead. Malmstrom caught a bit of the wall before Guss completed his pass at the flagstand for the lead on lap 56.

Guss wouldn’t be caught from that point, winning ahead of Cothron, Kay, Malmstrom and point leader Jeff Aikey.

The $2,000 victory was the third out of the last four series events, and the fourth this season for Guss. He’s now second on the all-time Deery wins list with 27 career checkers.

Notes: Guss’s MasterSbilt Race Car is sponsored by Roberts Custom Software, Sears Seating, P&L Transportation and Roemer Machine & Welding. ... Mike Murphy Jr. was the $250 Sunoco Race Fuels feature qualifier drawing winner. ...Six races remain on the 2012 Deery schedule, the next on Aug. 13 at the Iowa State Fairgrounds Speedway in Des Moines. Pit gates open at 3 p.m., the grandstand opens at 4:30 p.m. and hot laps are at 5:30 p.m. with racing to follow. ... The 400th event in series history is Saturday, Sept. 1 when 34 Raceway hosts the $5,000 to win Pepsi USA Nationals.