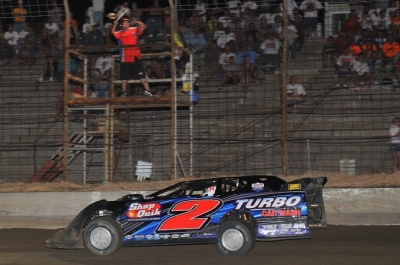 OSBORN, Mo. (July 18) — John Anderson of Omaha, Neb., came out on top of a rough and tumble race Wednesday at U.S. 36 Raceway, earning $3,000 in an event co-sanctioned by the Lucas Oil Midwest LateModel Racing Association and Corn Belt Clash circuits.

Anderson, the MLRA points leader, slipped under a faltering Will Vaught of Crane, Mo., with 11 laps remaining and led the rest of the 40-lap feature for his fourth MLRA victory of the season and second with the Iowa-based Corn Belt Clash. | Video | Slideshow

“I was just trying to be patient there and crank it up there at the end a little bit. The last couple of weeks, we’ve got our tails beat, so we went back to work and it’s paid off tonight,” Anderson said in victory lane. “It’s a little track condition than what we’re used to, but we’ve been missing on our setup every time we go out, so we’re glad we hit on it tonight.”

Fifth-starting Chris Simpson of Oxford, Iowa, got a runner-up finish while Terry Phillips of Springfield, Mo., slipped around Vaught exiting turn four on the final lap to get third. Vaught, whose car suffered damage from collisions with the slower car of Kevin Sather and then Billy Moyer, settled for fourth with Chad Simpson of Mount Vernon, Iowa, rounding out the top five.

Vaught outjumped polesitter Dave Eckrich out at the outset and stretched to a straightaway lead as he left Anderson, Chris Simpson and Moyer to battle for the second spot early in the race. Chris Simpson closed up on Vaught on the 15th lap after the leader’s car banged together with Sather on the backstretch, causing some right-rear damage to Vaught’s machine.

Vaught maintained control, however, shutting the door on Anderson’s bid for the lead on lap 20 as Chris Simpson slipped back to fourth. Moyer nearly slipped by Anderson to take second on lap 27, but after contact between the two, Anderson held the spot.

Vaught was still in control on lap 30, but he barely caught the frontstretch wall past the flagstand, losing enough momentum to allow Anderson to run underneath him entering turn one. Anderson edged away while Vaught had his hands full with Moyer in a battle for second.

Anderson cruised the final five laps while Vaught struggled to the finish, losing two spots the rest of the way.

Notes: Anderson’s Greg Junghans-owned MasterSbilt Race Car is powered by a Jay Dickens Racing Engine and sponsored by Shop Quik Convenience Stores, Turbo Car Wash, Allstar Performance and the FAITH Youth Team. ... Anderson’s previous touring victory, also co-sanctioned by MLRA and the Corn Belt Clash, came May 27 at I-80 Speedway in Greenwood, Neb. ... Reigning Lucas Oil Late Model Dirt Series champ Jimmy Owens of Newport, Tenn., reached back into his modified bag of tricks for a victory in the modified feature, driving Mark Dotson’s No. 85D to victory over John Allen in the A-modified feature event. ... Anderson and Owens will be among drivers heading to I-80 Speedway for the weekend with the $25,000-to-win Lucas Oil Late Model Dirt Series-sanctioned Silver Dollar Nationals on tap; MLRA co-sanctions the event.