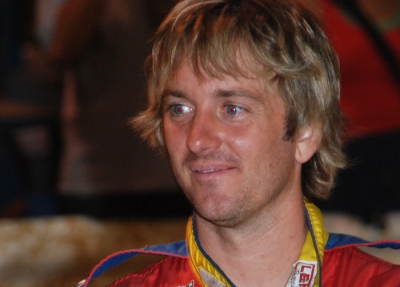 OK, Steve Francis, so it’s the final laps of the third annual Circle K Colossal 100 at THE Dirt Track @ Lowe’s Motor Speedway, and you have Dale Beitler’s No. 19 dirt Late Model up front battling for the lead with a familiar-looking car. Yeah, that would be your No. 15 car, with Tim McCreadie behind the wheel. With a $50,000 top prize on the line, what’s going to be racing through your mind, Steve?

“At that point, I’ll be thinking, ‘Don’t make a mistake and take us both out,’” Francis said with a smile in considering the scenario he could experience Saturday during his first event fielding a car from his stable for McCreadie. “That would be an ideal situation, though, especially with how well the Colossal pays back. I just hope I’m leading and he’s running second.”

Francis will begin an interesting big-show experiment at this weekend’s Circle K Colossal 100. With the Ashland, Ky., driver stepping out of his own top-notch equipment this season to chase a second straight World of Outlaws Late Model Series title with Beitler’s West Friendsville, Md.-based team, he’s hired fellow WoO titlist McCreadie to steer his well-known No. 15 in several major events. Why did Francis, 40, seek out the 34-year-old McCreadie to fill the seat of his Steve Francis Racing machine?

“Who else would you pick if you’re looking for a driver?” Francis asked rhetorically. “Getting Timmy to drive my stuff a few times is just the right situation for him and me. It keeps all my sponsors happy and gives me something to do — hopefully not too much — to keep my shop active and everything up-to-date while I’m running for Dale.”

Back in early December when the pairing of former WoO champions was revealed, McCreadie, who won the title in 2006, was uncertain about how much dirt Late Model racing he would be able to do in 2008. He was hopeful that his deal as a Richard Childress Racing Development Driver would result in a schedule heavy with NASCAR Nationwide Series starts — a direction that would likely curtail his appearances with the Sweeteners Plus dirt team — so a limited arrangement to run with Francis seemed very attractive.

Of course, a lack of sponsorship for RCR’s No. 21 Nationwide Series team has left McCreadie in limbo with his pavement aspirations and he’s continued to drive the Avon, N.Y.-based Sweeteners Plus dirt Late Models. But he’s upholding his commitment to race the Francis No. 15, a car he feels honored to buckle up in.

“One day a few months ago, when I was looking to do some races with different people, I was talking with Francis on the phone and he said, ‘I want you to come drive my stuff,’ ” said McCreadie. “I was like, ‘Sure.’ Any time one of the top guys thinks enough of you to ask you to drive their car, it’s flattering. The fact that he wanted me to drive for him, when it could take money out of his pocket, because he likes me or thinks I can get the job done or whatever, that’s cool.

“It helps both of us. He’s got sponsors and product sponsors that now he can give some races, and he can keep his equipment up-to-date just in case something ever happens where he has to run it. You just can’t let stuff sit dormant and expect it to say top-notch.”

McCreadie knows he’ll have a solid entry entry at his disposal when he climbs into the Custom-powered Valvoline Rocket for the Colossal as well as his other tentative assaults with Francis, including Eldora Speedway's Dream and World 100.

“It’s the exact same car he ran last year and won with, so hopefully I can get in there, be comfortable and get it up to speed,” McCreadie said. “Just seeing how he races, he knows what it takes for a race team to win, and that gets me excited.

“He thinks he can give me a chance at winning some of the bigger races — and I’m all for that. I haven’t gotten (a win in) any of these big races yet, so that’s something I’d love to do. We’ve been up front in them, but we just haven’t hit on what we need to win one yet.”

Dates: April 18-19
Venue: The Dirt Track @ Lowe's Motor Speedway in Concord, N.C. (4/10-mile oval)
Sanction: World of Outlaws Late Model Series
Purse: $200,000 with $50,000 to the winner and at least $2,000 to all 36 starters in one of dirt racing's richest events
Format: Friday time trials and heat races will set the lineup for Saturday's 100-lap feature
Last year's winner: Scott Bloomquist, the only winner in two runnings of the event