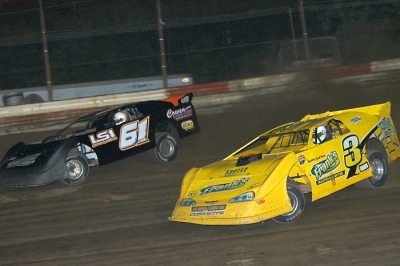 George Lee (61) rides the high side to victory at Hilltop Speedway. (Diane Bemiller)

The second-starting Lee led the 40-lap race flag to flag, holding off a hard charge from Doug Drown of Wooster, Ohio, as the two leaders raced through heavy traffic during the race’s closing laps.

Australian Ross Nicastri led the field to green after winning a dash among the event’s fast eight qualifiers, but it was Lee sprinting into the lead on the start. Nicastri would be quickly challenged by Drown for second with Drown taking control on lap five as Dohm and Nicastri went back and forth for the third spot over the next 10 laps.

A caution waved midway through the race, just as the front-runners were getting into the back markers.

On the restart, Lee built a five-car-length advantage over Drown as Dohm and Maffett were joined by Moran in the battle for third.

With Lee running the high side and Drown in his tire tracks lap after lap, the leaders caught the tail of the field around the 10-to-go mark and Drown began to look to make a low-side challenge for the lead.

As the white flag flew, Drown made his final charge on Lee, pulling alongside coming out of the final turn. But Lee’s high-side momentum was enough to pull back ahead by a car length at the finish line.

Notes: Lee’s No. 61 Rocket Chassis has a Malcuit engine and sponsorship from Cowen Truck Line and LSI. ... Lee has 19 victories at Hilltop in his career. … The victory is Lee’s second big-money win of the season at Hilltop. He earned a $5,000 payday at the track earlier in the year. … Drown earned a $1,000 for recording the best finishing average between Saturday’s race and the ADRA race at Muskingum County Speedway Friday night. Drown finished third Friday in a race won by Donnie Moran. … The ADRA tour returns to action Aug. 3 with twin features at Jackson (Ohio) County Speedway.