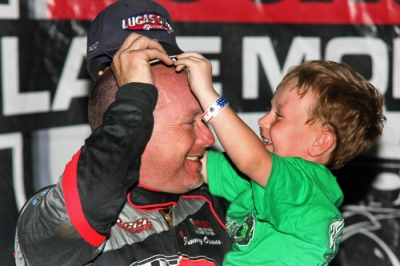 In a race similar to the Dart Show-Me 100 feature on Memorial Day Weekend, Jimmy Owens of Newport, Tenn., and John Blankenship of Williamson, W.V., battled late in Saturday’s sixth annual CMH Diamond Nationals, with Owens once again topping Blankenship for victory at the 3/8-mile oval. | Slideshow

The repeat performance netted Owens $10,000 and his first victory since his Show-Me 100 triumph.

Blankenship made Owens work hard for the victory, charging from his sixth starting spot to second early in the 50-lap race and applying heavy pressure to the leader. He moved out front to lead laps 20 and 21, but Owens recovered and moved ahead on lap 22.

After regaining the lead, Owens put a handful of car lengths between himself and Blankenship during the second half of the race, but lapped traffic during the closing laps allowed Blankenship to make another challenge.

Blankenship looked under Owens a number of times during the final two laps, but couldn’t complete the pass as Owens held on for his fourth victory in track’s past six Lucas Oil Series events.

"The last two or three times we have been here, it has been a heck of a race,” said Owens, the reigning Lucas Oil Series champion and current points leader. "I am going to have to get on John; he is not supposed to be passing me. Our car was real good tonight, we started off the race really well, every once in a while you will get a track you like. Tonight they worked on it, my hats off to them; they went out and smoothed it out a little bit.”

Blankenship, who finished second to Owens in at the Show-Me, again settled for the runner-up position, earning his third finish of second or better in the tour’s past five races.

Don O'Neal of Martinsville, Ind., ran among the top five for the entire race and closed in on the leaders late. But he couldn’t quite close the gap to seriously challenge Blankenship for second, and held third at the finish.