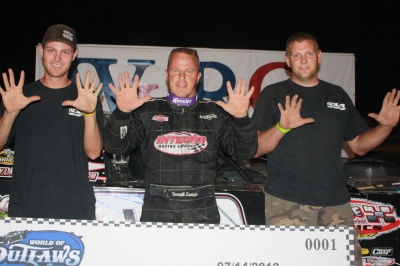 Darrell Lanigan and his crew members are going to have to count toes if the victories keep coming. (Kevin Kovac)

Adding another flourish to a campaign that is shaping up as the most dominant in World of Outlaws Late Model Series history, Lanigan rolled to victory in Saturday night’s Dondelinger Automotive Company 50 at North Central Speedway to set a single-season win standard on the national circuit. | Video

Lanigan, 42, of Union, Ky., overtook Rick Eckert of York, Pa., for the lead on lap 14 and never looked back en route to his 10th triumph of 2012, surpassing the nine-win seasons authored by Scott Bloomquist and Josh Richards. He also extended his commanding points lead to 152 points over Eckert, who finished a distant 4.717 seconds behind Lanigan in the runner-up spot.

With the $10,650 checkered, Lanigan closed the five-race Wild West Tour with three victories in a row, putting him one away from tying the WoO consecutive-win record when the series returns to action on Aug. 1 at Shawano (Wis.) Speedway.

“It’s awesome to set the record,” said Lanigan, whose 36th career WoO victory moved him within two of matching Richards for the most wins on the tour since 2004. “We’re not satisfied, though. We want to get as many (wins) as we can. We go to every race to try to win it, so we’ll see what we can come up with (the remainder of the season).”

Clint Smith of Senoia, Ga., who was passed by Lanigan on the final lap for the win in Friday’s race at River Cities Speedway in Grand Forks, N.D., finished third at North Central. He started from the pole position but slipped to third on the opening circuit and ran there for the entire distance in his Rocket machine.

Lanigan emerged triumphant despite receiving a penalty for jumping the race’s initial green flag. Officials ruled that Lanigan, who started from the outside pole, fired before polesitter Clint Smith and put him back to the fourth spot for the restart.

Eckert, 46, benefitted from the penalty levied on Lanigan by moving from fourth to second for the restart and then immediately driving his Bloomquist car into the lead, but he was no match for the fast — and angry — Lanigan. Lanigan vaulted his Rocket into second on the restart and chased down Eckert to assume command with an inside move off turn two on lap 14.

“I think they pissed me off a little bit there,” Lanigan said of his reaction to the jumping penalty. “They probably shouldn’t have done that. It made me drive a little bit harder.

“The car was awesome. (Eckert) got into lapped traffic and couldn’t move around as well as we could, and I kind of got him pinned a little where we could make a move.”

With the race running without interruption after two caution flags before a lap was completed (Lanigan’s jumping penalty and a multi-car tangle in turn four involving, among others, Vic Coffey of Caledonia, N.Y.), Eckert fell more than a straightaway behind Lanigan shortly after the halfway point. He turned back a late challenge from Clint Smith to secure second place.

“That guy’s rolling,” Eckert said of Lanigan. “He was on a different tire and he made the right choice, but his car and his whole team are working good.

“I think we were a little too soft on tire. By the time we got to (lapped) traffic I was out of tire. I couldn’t move off that top to pass lapped cars like Darrell could.

“We made a bunch of strides on this trip, though, and got our act a little bit closer to where we can at least see (Lanigan) now,” he added. “I think a couple more changes and we’ll be able to race with him.”

Shane Clanton of Fayetteville, Ga., raced just outside the top five throughout the distance, settling for a sixth-place finish. Tim McCreadie of Watertown, N.Y., placed seventh after battling hard to move up from the 10th starting spot on a 3/8-mile oval that developed a dominant outside lane during the headliner.

Pat Doar of New Richmond, Wis., ran in the top five for the first half of the event but faded to eighth at the checkered flag; Tim Fuller of Watertown, N.Y., fell from the fifth starting spot to ninth; and 24-year-old Jake Redetzke of Eau Claire, Wis., scored a career-best WoO finish of 10th to earn a $500 bonus as the highest-finishing driver who hasn’t won a series race and isn’t in the top 12 in points.

With 23 drivers entered, only Jill George of Cedar Falls, Iowa, failed to start the race. Her night ended abruptly when she pounded the wall between turns one and two during her first time-trial lap. Her car sustained significant damage but she escaped the wreck uninjured.