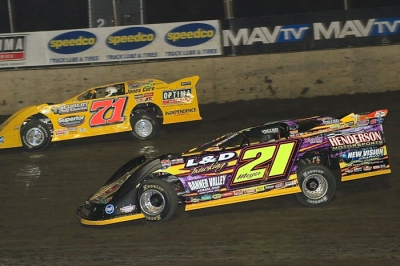 PONTOON BEACH, Ill. (July 13) —Billy Moyer of Batesville, Ark., continued his dominance of Tri-City Speedway, leading the second half of Friday’s Lucas Oil Late Model Dirt Series-sanctioned Battle of the Beach 50 to earn his third $10,000 victory of the season at the St. Louis-area racetrack.

Moyer, whose other Tri-City victories came in May 27’s Budweiser 50 and the track’s UMP DIRTcar Summernationals event on June 22, led the first 17 laps of Friday’s 50-lapper until 12th-starting Don O'Neal of Martinsville, Ind., powered ahead on lap 18. Moyer regained the top spot when O’Neal’s left-rear tire went flat on lap 27 and led the remaining distance at the Kevin and Tammy Gundaker-promoted track.

"We always like coming here ever since they reconfigured the race track a few years ago,” the 54-year-old Moyer said in victory lane. “It's just the perfect size, and to win here again is just tremendous. Kevin (Gundaker) and his staff do a great job here.”

Starting from outside of the front, Moyer led polesitter Jimmy Owens of Newport, Tenn., until the race’s first caution waved with 13 laps complete, halting a close battle for the lead in traffic between Moyer and Owens, the defending series champion and current points leader.

The hard-charging O'Neal advanced to the fifth spot before the caution, and after the restart used the track’s low groove to charge to second on lap 14.

O’Neal, who won the tour’s previous event July 7 at Magnolia Motor Speedway in Columbus, Miss., took the lead from Moyer three laps later and held command until the untimely flat ended his hopes of a second consecutive victory on the national series.

Using evasive action to avoid O’Neal’s slowing machine, Moyer moved back out front and paced the field over the race’s final 22 laps. The race’s final caution for Tyler Reddick of Corning, Calif., with two laps remaining set up a green-white-checkered finish, but Moyer held off Owens to score the victory.

"I knew he started way back, but he must have come up through the field awfully fast,” Moyer said of O’Neal’s quick ascension to the front. “The next thing I knew, he was in the lead. I thought I saw his tire starting to go down; don't know if he ran over something or what, and then he slowed in front of me.”

The victory was Moyer’s second Lucas Oil Series victory of the season and 15th of his career. It’s also his 14th overall win of the 2012 season.

“It has been a pretty good year, and to beat these Lucas Oil guys is quite an accomplishment,” Moyer said.

Owens settled for the runner-up finish, ending a recent slump with his first top-five finish in just over a month. Former series champion Earl Pearson Jr. of Jacksonville, Fla., came from ninth to finish third with eighth-starting Steve Francis Jr. of Ashland, Ky., and 15-year-old Bobby Pierce of Oakwood, Ill., rounding out the top five.