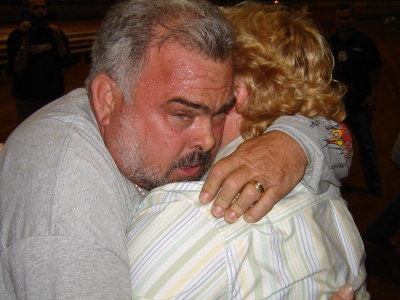 Charles Buckler doled out the hugs at VMS. (Kevin Kovac)

Everyone who knows car owner Charles Buckler would say he has a very, uh, animated personality. So the big question has always been: Just how wildly would Buckler celebrate if he won a World of Outlaws Late Model Series event? | Miller wins at VMS

The answer came April 11 at Virginia Motor Speedway, where Buckler’s driver, Jeremy Miller, captured the 50-lap Rumble on the River IV to bring Buckler the Outlaws checkered flag he’s long coveted. “I did flips all the way to the front straightaway,” the 50-year-old Buckler said of his walking-on-air jaunt through the infield to meet Miller in Victory Lane. “Nah … I’m only kidding. But I was close.”

Actually, Buckler, who hails from Maryland, pumped his fists, flexed like a posing bodybuilder, yelled “We beat the Outlaws!” over and over, and hugged anyone who crossed his path. After saying a few quick, emotion-draped words to WoO announcer Rick Eshelman over the track PA system, he gave his driver the warmest greeting he’s ever dished out.

As Miller later reported when asked about Buckler’s post-race excitement: “He always gives the hugs (after a race), but tonight he wanted to give the kisses.” Yes, Buckler planted a warm, wet one on Miller, a cool, calm and collected 37-year-old driver from Gettysburg, Pa. “I said, ‘Kid, you’re my hero,’ ” Buckler related when asked how he congratulated Miller, “and then I just kissed him right on the cheek. I didn’t go no further than the cheek!”

A former racer-turned-car owner who is in his 31st year involved with the sport, Buckler saw Miller come close to winning him a WoO show more than once last season, but Lady Luck wouldn’t let them complete the deal. Particularly disappointing was Miller’s loss on first night of last year’s inaugural Outlaws World Finals at the Dirt Track @ Lowe’s Motor Speedway in Concord, N.C., where Buckler watched Miller relinquish the lead to mechanical trouble while he partied with friends, family and sponsors in a tower suite he had rented for the evening. The heartbreaking near-misses were forgotten, however, when Buckler and his wife, Genny, stood with Miller for victory lane photos at VMS.

“Oh, man,” Buckler said in his distinctive southern-fried accent, “this is the best race I’ve ever won. We beat the best! We beat the Outlaws! The World of Outlaws is the best series to run with. They have a good series, they treat everybody equal. I’m just tickled to death that we can run with ‘em.

“When you run with these Outlaws, and you beat ‘em, you beat the best in the country. As far as I’m concerned, there ain’t nobody better than (the WoO regulars). It’s a big, big, big deal in my career that now I can put in my books that I’ve won a World of Outlaws race. I just can’t say it enough.”

The grand triumph led Buckler to reflect on his years in the sport, especially his successful run with Miller behind the wheel of his No. 24 cars. Since Miller joined Buckler Motorsports late in the 2002 season, he’s captured 52 dirt Late Model feature wins.

“We picked up little Jeremy here six years ago,” said Buckler. “My wife really wanted him to drive the car, and it’s the best thing that ever happened to us. He’s a top-notch racer, he wants to win, he races clean, and you never hear him holler.

“I’ll tell you this — me and my wife have been in this (sport) so long, and we still enjoy it. It’s just a wonder that I have the luck to be with a woman who just wants to race … that’s all she wants to do. Win or lose, we enjoy ourselves. It’s just fun to be at the racetrack.”

Buckler certainly enjoyed himself famously in the VMS pit area following Friday’s race. “It’s going to be a long night,” he smiled.

Being his usual fun-loving, joking self, Buckler basically held court with the crowd that gathered to congratulate him and Miller on their accomplishment. He had a barb for everyone who stopped by.

For instance, when Shannon Babb’s long-time mechanic, Jay Hunt, visited to shake Buckler’s hand, Buckler chirped, “I want to thank Jay Hunt, because he’s the one who told me to buy those Bullock motors (that powered Miller to victory).”

Then Buckler noticed that WoO LMS star Chub Frank was standing a couple feet away and he chimed up again. “Look at Chub, he’s over there laughing,” quipped Buckler. “But he don’t realize that he’s the next victim. I got the one legend, Billy Moyer (whom Miller passed at VMS to take the lead), and now my next one is Chub Frank.” Frank chuckled and shook his head. Buckler smiled and slapped Frank on the back.

Oh, what a fun night at the speedway it was for a car owner who just loves racing.

“I’ll tell you this — me and my wife have been in this (sport) so long, and we still enjoy it. It’s just a wonder that I have the luck to be with a woman who just wants to race … that’s all she wants to do. Win or lose, we enjoy ourselves. It’s just fun to be at the racetrack.”