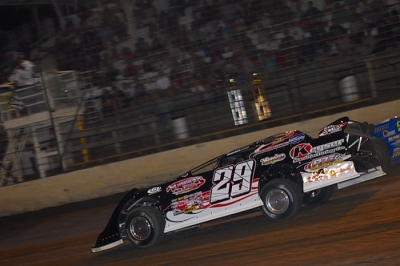 In another memorable World of Outlaws event at the high-banked, quarter-mile oval, Lanigan, 42, chased Smith for the entire distance before finally slipping underneath the leader racing down the backstretch on the last circuit. Lanigan found just enough traction on the bottom of turns three and four to beat Smith back to the checkered flag by a mere 0.024 of a second – likely the closest finish in the history of the WoO Series.

The $10,650 triumph was Lanigan’s ninth of 2012, matching the national tour’s modern-era (2004-present) single-season record held by Scott Bloomquist and Josh Richards. He will have his first opportunity to establish a new standard on Saturday night when the WoO’s Wild West Tour concludes at North Central Speedway in Brainerd, Minn.

“It’s definitely awesome to be able to tie (the single-season win record),” said Lanigan, whose 35th career WoO victory moved him within three of tying Richards atop the circuit’s win list since 2004. “It definitely helps the bank account too. We’ll just keep on chugging and see what we can come up with.”

Smith, 47, started from the pole position and continually repelled Lanigan’s bids until the last-lap drama left him with a runner-up finish. It was his best outing of the season with his Rocket mount, but his WoO winless streak reached 49 races since his last victory, on May 8, 2011, at Needmore Speedway in Norman Park, Ga.

Brady Smith of Solon Springs, Wis., who scored the first WoO victory of his career at River Cities in 2008, finished third in his Team Zero by Bloomquist car. He started eighth and was still mired back in sixth when the race’s third and final caution flag flew on lap 36, but he charged into third on lap 40 and crossed the finish line just one second behind the leaders.

Sixth-starting Terry Casey of New London, Wis., battled inside the top five throughout the distance – even briefly slipping past Lanigan for second on a lap-30 restart – but settled for fourth place in his MasterSbilt car. Defending WoO champion Rick Eckert of York, Pa., completed the top five, advancing from the ninth starting spot in his Team Zero by Bloomquist machine.

Lanigan, who started third but slid into second on the opening lap, actually had mixed emotions after earning a roar from the evening’s large crowd with his final-lap heroics. As much as he wanted a second consecutive triumph on the Wild West Tour and a second career win at River Cities (he topped the track’s inaugural WoO event in 2006), he would have loved to congratulate Smith on a slump-busting victory.

“I’d have rather seen ‘Cat’ win it,” said Lanigan, using Smith’s popular nickname. “We’ve been teaming up a little bit here, traveling together. We’ve been trying to help his program too and get him back in the winner’s circle.

“I was pulling for him (while running second), but he gave me a little bit of room (on the last lap)...and we gotta race our program too, so we had to take the win there. He kind of dropped off that cushion on the last lap and I got mine bent pretty hard, and I came down across that bottom and got a pretty good run.”

A brake problem that hampered Smith throughout the race finally bit him with the white flag flying.

“We had air in (the brakes) from last night and didn’t catch it through the night to bleed it out,” said Smith. “I was having to pump the brakes the whole race one time down the straightaway so I’d have a pedal. When I would miss that pump I would push bad getting in the corners and I’d have to really turn it with the fuel.

“Well, down the back straightaway (on the last lap), with that lapped car ahead as I was trying to beat Darrell off the corner, I must have just missed the pump and it pushed right up to the cushion just enough that I couldn’t get it to rotate to get back to the good stuff leaving (turn four). I had to leave (the corner) outside him – and I almost had enough traction to beat him (to the finish line), but I didn’t.

“I needed to turn the car to come back down (off turn four) like I did the whole end of the race, but I just didn’t get it rotated enough – plus Darrell was already there under me, and we run each other clean so I didn’t want to get into him. He just had the better line and the better maintenance program today.”

Smith found little solace in coming so close to defeating the mighty Lanigan, whose dominant WoO campaign has him leading the points standings by 148 points over Eckert and nearing the $200,000 mark in earnings after 26 events.

Chub Frank of Bear Lake, Pa., finished sixth after making a late surge. Outside-polesitter Vic Coffey of Caledonia, N.Y., ran fourth for much of the distance but faded after the race’s final restart, finishing seventh. Shane Clanton of Fayetteville, Ga., started fourth and climbed as high as third on lap 35, but an incorrect tire choice caused him to fall to eighth in the finishing order. Jimmy Mars of Menomonie, Wis., quietly worked his way forward from the 18th starting spot to place ninth and Pat Doar of New Richmond, Wis., rounded out the top 10.

Three caution flags slowed the event, all for stopped cars. Tim Fuller of Watertown, N.Y., went off the backstretch on lap 30, while Tim McCreadie, also of Watertown, N.Y., fell off the pace with mechanical trouble on lap 35 – moments after reaching fifth place – and stopped in turn four on lap 36 while trying to return to the track from the pits to trigger another caution.

McCreadie retired shortly after drawing the second caution, leaving him with a 19th-place finish. It was first outing outside the top 10 in his last 17 starts and just his fourth run outside the top five over that span.

Thirty-two cars entered the event, which marked the seventh consecutive year that the WoO tour has competed at River Cities.

Clanton was quickest in Ohlins Shocks Time Trials with a lap of 12.121 seconds. It was his second fast-time honor of 2012.

Heat winners were Clanton, Brady Smith, Clint Smith and McCreadie. The B-Mains were captured by Dustin Strand of Grand Forks, N.D., and Mars.

The night’s lone crash came during time trials when two-time WISSOTA Late Model national champion Ricky Weiss of St. Francois Xavier, Manitoba, jumped the cushion between turns one and two and flipped wildly down the wall-less track’s steep embankment. He escaped the accident without injury and later started the B-Main in the same car and took the green flag in the A-Main thanks to the WoO points provisional starting spot he received.