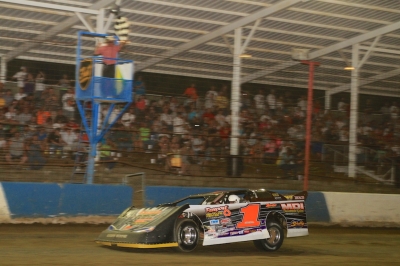 TERRE HAUTE, Ind. (July 12) — Don O’Neal has been at both extremes with the Illinois-based Moring Motorsports team on the UMP DIRTcar Summernationals tour. In 2010, O’Neal drove the No. 1 car to three victories over a four-race stretch, but 2012 was a different story as he cracked the top 10 just once in seven events, missing four feature races altogether. | Complete Summernationals coverage

So after struggling in the Larry Moring-owned team’s newer MasterSbilt Race Car, O’Neal went back to the tried and true machine that carried him to success two years ago, and the 48-year-old from Martinsville, Ind., got right back in the groove.

After chasing Brandon Sheppard for the first 22 laps Thursday at the Terre Haute Action Track, O’Neal took advantage of the struggling leader on the 23rd lap and cruised the rest of the way for a $5,000 victory on the 26th leg of the month-long tour. The victory was O’Neal’s 39th of his career on the series and his third in the tour’s four races at the historic half-mile oval.

“The caliber of the race team and this crew that’s here, to run like we had, everybody was really disappointed,” said O’Neal, who hoped to run the car last night but saw a broken rear end prevent him from starting the feature in Peebles, Ohio. "That’s the reason why we thought we wanted to come tonight and give this car one more shot, because we didn’t give it a chance last night. ... it’s still a good ol’ race car.”

O’Neal took the checkers more than two seconds ahead of series points leader Brian Shirley of Chatham, Ill., who boosted his margin over title pursuer Shannon Babb to 76 points with just two races remaining. Sheppard, of New Berlin, Ill., manhandled his car late in the race to salvage a fading third-place finish while Frank Heckenast Jr. of Frankfort, Ill., rallied from 14th to finish fourth. Babb, the reigning series champ from Moweaqua, Ill., rounded out the top five.

Starting outside the front row and jumping into the early lead, Sheppard appeared to have the race in hand most of the way, building nearly a straightaway lead on the 12th lap after clearing a patch of lapped traffic. O’Neal drew closer on lap 17, but O’Neal got too high in turn three, allowing Sheppard to rebuild his advantage before a pair of cautions slowed the race with 10 laps remaining.

On the restart, O’Neal stuck right with Sheppard, who was struggling with his car's steering after the track's soft cushion crushed the plastic nosepiece flare into his right-front tire. Sheppard continually got too high exiting turn two, and when he did it on lap 23, O’Neal and Shirley both blew past on the backstretch. Sheppard quickly recovered to regain second from Shirley exiting turn four, then gained on O’Neal before he struggled more with his steering in the closing laps, falling behind Shirley and out of contention.

“I think we pretty much had it won,” said a disappointed Sheppard, who is piloting the Rocket Chassis house car on the tour. “My guy was giving me signs saying I had about a straightaway lead, and going into (turn) one one of them laps, the cushion was building up a little bit, and we knocked the nose off and pulled the nose under, and couldn’t turn after that. So we just kind of had to throw it in there and hope for the best, and it didn’t work out for me too good.”

O’Neal was facing a similar issue but his car didn’t appear to struggled as much as Sheppard’s exiting turn two.

“He knocked his right-front in, and I knocked my right-front into my tire, and we just got to pushing getting in the corners, and he was doing the same thing,” O’Neal said. "He just got to washing out there a lot wider than I would coming off of (turn) two, and I’d try to get out in the (middle of the track) and get my car turned more in the middle of the corner, that way I didn’t have to drift out as far as he had to.”

The feature was slowed by a pair of cautions, both on the 20th lap. A faulty battery cut power to Jason Feger’s car and he slowed to a stop at the same time Shane Cottle was slowing to draw the first yellow. On the restarts, fourth-running Mike Spatola and Ryan Unzicker tangled in turn two, and Unzicker ended up facing the wrong way while Spatola did a 360-degree spin and kept rolling. Unzicker restarted at the tail of the lead lap while Spatola, upset with the decision by officials to put him on the rear, decided to retire.

Notes: O’Neal’s Moring Motorsports MasterSBilt is sponsored by Freeport Recycling Center, MDI Environmental Systems and Stuckey Enterprises. ... O’Neal’s previous series victories at Terre Haute came in 2000 and 2003, the time the tour was at the stronghold for open-wheeled cars. ... Frank Heckenast Jr. got just his second top-five finish in 20 series starts. ... Nine of 22 starters finished on the lead lap and 13 were running at the finish. ... Jason McBride was running fifth on a late-race restart for the second straight night, losing positions both times; he finished eighth at Terre Haute. ... Dennis Erb Jr.’s crew chief Heather Lyne turned in the car’s transponder saying they didn’t plan to run the final two series races. ... The series heads back to Ohio for the final weekend with Friday’s race at Attica Raceway Park and Saturday’s finale at Oakshade Raceway in Wauseon.

Series points leader Brian Shirley redraw the pole for the 30-lap main event. ... Brandon Sheppard will start alongside and Dennis Erb Jr. is third. ... The modified B-main is set for about 9 p.m. and the Late Model feature should follow quickly thereafter.

Dennis Erb Jr. got the jump on traveling partner and sponsor Jerry Lierly for a victory in the third heat. Third-starting Mike Spatola made a high-side pass exiting turn four midway through the race to drop Lierly to third as the finished far ahead of fourth-place finisher Russ Adams.

In a heat racing with the $25,000 series title contenders facing off, Brian Shirley turned back a challenge on a restart from Shannon Babb for an eight-lap victory. Babb got the second spot and polesitter Ryan Unzicker was third as all the finishers transferred to the main event. Nick Bartels drew a lap-three caution.

Brandon Sheppard led all the way from outside the front row for an eight-lap victory. Don O'Neal powered around polesitter Bobby Pierce near the midway point to get second with Pierce third ahead of Jason Feger. All the drivers transfer to the main event.

In his first-ever appearance at the track, 15-year-old Bobby Pierce of Oakwood, Ill., topped 22 qualifiers in Thursday’s time trials for the 26th leg of the UMP DIRTcar Summernationals. Pierce tripped the clock at 20.037 seconds on the historic half-mile oval hosting a rare Late Model event.

Pierce will start on the pole of the first heat in Thursday’s preliminaries. Other heat polesitters based on group time trials: series points leader Brian Shirley of Chatham, Ill., and three-time series champion Dennis Erb Jr. of Carpentersville, Ill.

With 22 cars in action, everyone will start the main event with the lineup set by the three heat races. Heat race winners will redraw for the top three starting spots. The feature event pays $5,000-to-win

Brian Shirley of Chatham, Ill., brings a 61-point lead over Shannon Babb of Moweaqua, Ill., into the event with just three races remaining on the month-long tour. Shirley has been among the top three finishers each of the last six races in extending his points lead. ... Former series regular Tim Lance of Brimfield, Ill., is making his first series start of 2012. ... Twenty-nine modifieds are also in action. ... Don O’Neal has won two of the three series events at Terre Haute (2000 and 2003, the most recent previous event). ... O’Neal is piloting the Moring Motorsports MasterSbilt for the third straight night on the series. ... Open-wheel standout Shane Cottle is piloting the John Hollifield-owned Late Model. ... The Vigo County Fair is ongoing on the Wabash Valley Fairgrounds.