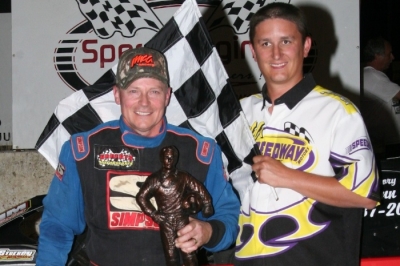 WEST LIBERTY, Iowa (July 10) — The second Deery Brothers Summer Series event of the season at West Liberty Raceway looked a lot like the first. Ray Guss Jr. of Milan, Ill., started on the pole and led from start to finish in a convincing Tuesday night run to the IMCA Late Model tour checkers.

The $2,000 victory gave the two-time defending series champion a bookend trophy to the one he got at West Liberty in April. Guss had led the last 28 of 40 laps in winning by a comfortable margin that evening. | Slideshow

Guss repeated that strong showing when the series returned, catching up with the back on the field just eight laps into the 35-lapper and checking out.

The only caution came when Gary Webb’s motor expired on the 26th circuit. Nick Marolf of Moscow, Iowa, had raced from sixth to second early on but couldn’t gain ground on Guss. Andy Eckrich of Oxford, Iowa, was third followed by fellow home-staters Jay Johnson of West Burlington and Jeff Aikey of Waterloo.

Notes: Guss’s MasterSbilt Race Car is sponsored by Roberts Custom Software, Sears Seating, P&L Transportation and Roemer Machine & Welding. ... Nick Marolf’s runner-up finish was his career best on the series. ... Guss and Curt Martin are now tied for third on the series career wins list with 25 victories each. Aikey leads the way with 56 and Mark Burgtorf is second with 26. .... Denny Eckrich won his a consolation race and finished sixth. ... Series point leader Mike Murphy Jr. was ninth. ... Doug Yates nabbed hard charger honors after using a provisional and advancing nine positions to 14th. ... Jay Johnson won the $250 Sunoco Race Fuels feature qualifier drawing. ... Kyle Hinrichs was not injured after getting upside down and on top of an infield barrier at the conclusion of his heat race. There was considerable damage to the car and Hinrichs scratched for the night. ... Night two of the midweek twinbill is Wednesday at I-35 Speedway at Mason City. Pit gates open at 5 p.m., the grandstand opens at 5:30 p.m. and racing follows 7 p.m. hot laps. The main event for Late Models pays $2,000-to-win.