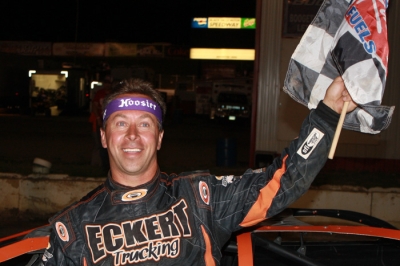 RAPID CITY, S.D. (July 10) — Something about racing at Black Hills Speedway agrees with Rick Eckert. Nearly a decade after reaching victory lane in his only previous visit to the South Dakota track, Eckert made a triumphant return, completing a sweep of Tuesday’s World of Outlaws Late Model Series program by capturing the Black Hills 50.

“Both times I’ve been here I’ve won, so I love this place,” said Eckert, who won a UDTRA series event in 2003 on the old 4/10-mile Black Hills layout that was bulldozed over and replaced by the current half-mile oval in ‘07. “I’ll tell you what, it’s so far from home, but I have to come back. It sure was worth the trip.”

Eckert, 46, of York, Pa., set fast time, won a heat race and raced off the pole position to reach the checkered flag first, but his second WoO victory of 2012 didn’t come easy.

After grabbing the lead for the first time from series rookie Kent Robinson of Bloomington, Ind., on lap nine, Eckert set the pace until Vic Coffey of Caledonia, N.Y., slipped in front amid lapped traffic on lap 47. Eckert fought right back, however, regaining command with an outside power move on lap 48 and then marching on to a badly-needed triumph in his Team Zero by Bloomquist car.

Coffey, 40, settled for a runner-up finish in the Sweeteners Plus Rocket, 0.714 of a second behind Eckert. He matched his personal-best WoO performance as he remained winless in 133 starts on the tour.

WoO Rookie of the Year leader Bub McCool of Vicksburg, Miss., finished third in his Victory Circle chassis after charging forward from the 10th starting spot. He reached the show position on lap 40 but never got close to the leaders, ending the race over seven seconds behind Eckert.

Tim McCreadie of Watertown, N.Y., advanced from the 16th starting position to place fourth — his 13th top-five finish in his last 15 starts — after deciding to switch to his backup Sweeteners Plus Warrior car following time trials, and fourth-starter Chub Frank of Bear Lake, Pa., finished fifth in his Rocket mount.

Eckert’s triumph, worth $10,700, came after he experienced arguably the most nightmarish trip of his career when the WoO swung through Canada, New York and Pennsylvania from June 22-30. His hauler developed major transmission issues and he broke three engines in a two-race span — a run of bad luck that left his continued pursuit of the WoO an uncertain proposition.

But Eckert’s rig was repaired and he obtained two engines from California Dirt Late Model racer Eric Jacobsen, allowing the defending WoO champion to head out on the circuit’s Wild West Tour.

“If it wasn’t for Eric Jacobsen, I wouldn’t have come out here,” said Eckert, who used his own Jay Dickens-built powerplant at Black Hills but has Jacobsen’s pieces in his trailer as backups. “This is a sport that knocks you down, and fortunately he’s a guy who will help me get back up.”

Eckert thought his misery might roll on with a late-race defeat when Coffey slipped underneath him rounding turns three and four on lap 47, but he refused to let the race escape his grasp.

“I was in a lane that I’m not normally in,” said Eckert, whose 26th career WoO victory was his first since Feb. 18 at Bubba Raceway Park in Ocala, Fla. “I was on the top most of the race. That’s where I could just bounce off the traction and keep my speed up.

“Then we got in traffic and I got held up pretty bad for quite a few laps. I knew I was a sitting duck, but they were side-by-side and then they caught four more cars ... I finally slid in there and got into the (Robinson) — we’re traveling buddies, but I had to get him up out of the way so I could get through. Then I got to Jimmy (Mars) and I floated real bad into (turn) three and Vic drove right by.

“But Victor got bit by the same lapped car and we got back by, so I guess it worked out in the end.”

Coffey, who started seventh but moved up one row when WoO points leader Darrell Lanigan of Union, Ky., relinquished the fifth starting slot because a broken engine lifter forced him to pit during the race’s pace laps, was gracious after coming close to a World of Outlaws victory once again.

“I thought I had him,” Coffey said of Eckert. “I got by him when he got held up a little in traffic, but then I got held up at the other end of the track (turns one and two). I caught the 7 car (Robinson) and I thought he was gonna miss the bottom (groove) and I’d drive right under him, but he didn’t that lap. He caught the bottom better than he’d been catching it and didn’t slide up, so I had to follow him.

“I was gonna drift out going into three, but I didn’t and it’s a good thing because Rick shot by me. He had that momentum and just went right by me.

“It’s frustrating to come so close again,” he continued, “but the car felt like it felt two months ago. We just haven’t had that lately, so we started over from square one and it was back to where it was earlier this season. I think we have something to work with.”

The race was slowed by just a single caution flag, on lap 23 for Dan Henrickson of Rapid City, S.D., who slapped the turn-one wall.

Pat Doar of New Richmond, Wis., finished sixth, giving him his strongest outing since cracking the top five in February at Bubba Raceway Park. Shane Clanton of Fayetteville, Ga., who won the Wild West Tour opener on July 7 at Deer Creek Speedway in Spring Valley, Minn., picked the wrong tire combination and struggled to a seventh-place finish. Brady Smith of Solon Springs, Wis., and Jimmy Mars of Menomonie, Wis., were eighth and ninth, respectively, and Robinson, who led laps 1-8 off the outside pole, ended the race one lap down in 10th.

Lanigan suffered his first DNF of 2012, retiring during the lap-23 caution period with his car’s engine running hot. He had climbed to eighth place after starting at the back of the pack because of his pace-lap pit stop.